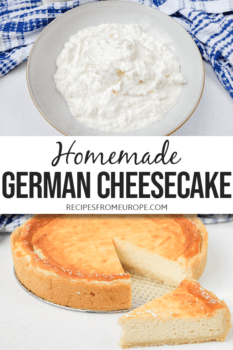 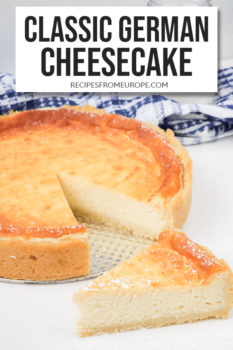 Here’s A Fluffy German Cheesecake Made From Fresh Quark!

Want a cheesecake that is fluffy and creamy with a hint of lemon zest? Our German Cheesecake recipe is for you!

Known as Käsekuchen in German (literally cheese + cake), this German-style cheesecake – made from quark – is the perfect dessert for any occasion.

Now, some of you may be asking: What’s quark? Quark is a dairy product similar to cottage cheese or yogurt… but it’s actually neither of those.

Quark is a staple in German baking and cooking. We have our own quark recipe because it’s almost impossible to get in North America.

Quark is only really found in Germany, Austria, and Switzerland. So it’s great that it can be made at home using just two ingredients – buttermilk and normal dairy milk.

In any case, the quark in the German cheesecake makes the final product lighter and fluffier on the inside than you might be used to from an North American cheesecake.

If you can’t find quark and don’t want to make your own, you could substitute for Greek yogurt. However, a true German-style cheesecake is made with quark!

That said, there are a few different variations of German cheesecake.

While they are all made with quark, you can have a crust-less version (no crust up the sides). This just means you adjust the ingredients for the dough to make less of it.

All we did was a light dusting of powdered sugar and it was great! This allows you to actually taste the sweetness and the creaminess.

So, how does a quark cheesecake compare to another style of cheesecake – like a New York style? This is a popular question.

The main differences between German cheesecake and New York Cheesecake are really just the type of crust, the type of cheese/dairy used, and as a result of that, the overall texture.

New York Cheesecake is made with cream cheese which creates a much denser, richer, and smoother filling when baked.

German cheesecake is traditionally made with German quark which (as we have mentioned) is a dairy product like yogurt or soft cheese but not really either one.

Another difference – depending on which cheesecake recipe you follow – is the crust. For North American cheesecake, people often use a soft graham cracker crumble for the crust.

German cheesecakes are usually a simple crust made with butter and flour. However, sometimes you can also find a buttery crust on the New York-style cheesecake. You can even find a type of sponge crust on some classic cheesecakes in New York.

How to Make German-style Cheesecake – Step-by-Step

If you’re looking to make a classic German-style cheesecake, you can check out the recipe card in the bottom of this post for all the ingredients and instructions.

In case you are more of a visual learner, you can follow along with our cheesecake process photos. This way, you can get a sense of how you’re doing and whether your creation looks like ours!

First, we’ll make the dough. For this, add the flour, sugar, salt, and baking powder to a medium-sized bowl.

Give everything a stir with a spoon.

Cut up the cold butter into small cubes and add them to the bowl. Also, add the egg and the vanilla extract.

Mix everything with the spiral dough hooks of your electric mixer or your clean hands until the dough is well combined and easily forms a small ball.

Cover the bowl with a lid or cling film and place it in the fridge.

Next, we’ll make the filling. For that, take a large bowl and add the eggs as well as the granulated sugar.

Use the normal beaters of your electric mixer to mix the eggs and sugar until you have a creamy mixture.

Keep mixing, until the mixture is light in color and looks creamy (and maybe has a few bubbles).

Then add the pudding powder and vanilla extract and mix again. Finally, also add the oil and lemon zest and mix until everything is well combined.

When you are done, set the bowl aside and clean the beaters of your electric mixer.

In yet another bowl, whip the cream with the clean beaters of your electric mixer. Then set your mixer aside.

Then carefully fold the whipped cream into the bowl with egg-sugar-mixture using a spatula.

Also add the quark and keep folding with your spatula until the mixture is well combined. As mentioned above, it is easy to make your own quark at home.

However if you are in a time crunch you could try making the recipe with Greek yoghurt or similar. (We can’t give any guarantees that it will turn out as great though).

When everything is well mixed it should have an even color and look similar to the photo above. Once you are happy with your filling, set the bowl aside.

Line the bottom of your 9 1/2 inch springform pan with parchment paper can lightly grease the sides.

At this time also preheat your oven to 330 degrees Fahrenheit.

Remove the dough from the fridge and sprinkle some flour onto your countertop. Roll out your dough with a rolling pin until it is a little bit bigger than your springform pan.

Lift the rolled out dough and place it into the pan. Press it into place slightly. You should have a crust of approx. 1 inch going up the sides.

Now pour the filling onto the dough in the pan and make sure it is evenly distrubuted. You can use a large spoon or spatula to do that.

Bake the cake on the lower third of your oven for 60 to 70 minutes. Once baked, remove the cheesecake from the oven and let it fully cool in the pan before removing the ring.

You can dust your cheesecake with powdered sugar before serving (this is completely optional). We hope you enjoy our Käsekuchen recipe!

Store the cooled cheesecake or any leftovers in an airtight container in the fridge. You should consume it within three to four days.

Alternatively, you can also freeze slices of the cheesecake. 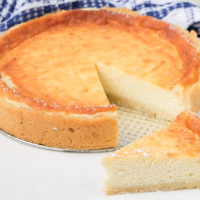 This German-style Cheesecake – known as Käsekuchen in German – is the perfect dessert. Made with quark and pudding powder, it has a light and fluffy texture. This quark cheesecake surprises with a hint of lemon and a delicious crust!
4.79 from 14 votes
Print Pin Save Saved!
Prep Time: 30 minutes
Cook Time: 1 hour
Total Time: 1 hour 30 minutes
Servings: 16 slices