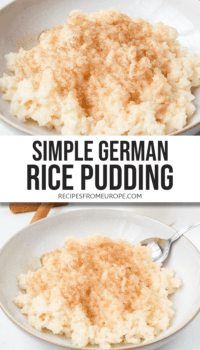 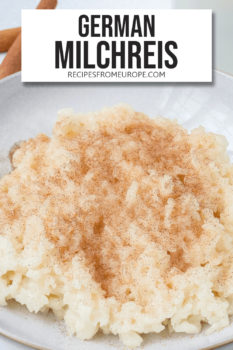 Milchreis Will Make You Rethink When To Eat Rice Pudding!

There are lots of rice and milk recipes out there – but there’s something about Milchreis that makes you come back for more.

Milchreis – or German rice pudding – can be eaten as a sweet dinner dish but can also be enjoyed as a dessert!

Literally meaning “milk rice”, our Milchreis recipe makes a creamy German sweet rice that goes well with a little cinnamon and sugar or with fruit on top!

Even though Milchreis is called “German rice pudding”, there are a few differences when comparing it to rice pudding typically enjoyed in North America.

For starters, in Germany, Milchreis can be eaten as a main meal whereas in North America it is almost always a dessert.

Lisa ate it as a sweet main course occasionally when growing up. She would have a sweet dinner with her family a couple of times a month.

An example of a “sweet German dinner” would be Milchreis with sugar and cinnamon (or fruit) or potato pancakes with apple sauce.

In Germany, you can buy rice that is labeled as “Milchreis” and is used to make rice pudding.

In North America – or at least in Canada – you can’t usually find rice specifically for rice pudding in supermarkets. However, short-grain rice like Arborio will work really well.

Another difference is that German rice pudding almost never contains raisins and is not made in the oven.

Eric’s mom makes a classic North American rice pudding baked in the oven with raisins so we definitely understand the differences!

How to Make Milchreis – Step by Step Instructions

If you want to make Milchreis at home, you can check out our German rice pudding recipe card at the bottom of this post.

Melt a little bit of butter in a medium-sized pot on the stove.

Once melted, add the rice and sauté it for a couple of minutes until it becomes just slightly translucent.

Give everything a stir and place the lid on the pot. Bring the milk to a boil and turn down the heat to low once it is boiling.

Let the rice simmer for around 20 minutes until it is tender and the liquid is absorbed.

Depending on the exact type of rice you are using, your cooking time may vary slightly.

If you want your German rice pudding to have a creamier consistency, you can add a little bit more milk.

Serve the milk rice with cinnamon and sugar sprinkled on top and/or with fresh fruit such as berries. Alternatively, you can also serve it with fruit salad or other fruit out of a can.

In our opinion, Milchreis tastes best fresh but you can store any leftovers in a container with a lid in the fridge for a couple of days.

You can then either reheat the leftovers or enjoy them cold. Since the rice might dry out in the fridge, you might have to add some more milk to make it slightly creamier again.

For more great sweet German recipes, check out these classics that will definitely please:

Milchreis – or German Rice Pudding – is a delicious, creamy dish. Eaten for dinner or dessert, this easy to make rice pudding recipe is topped off with a dusting of cinnamon and sugar or with some fruit like fresh berries or canned fruit salad!
4.27 from 15 votes
Print Pin Save Saved!
Cook Time: 20 minutes
Total Time: 20 minutes
Servings: 4