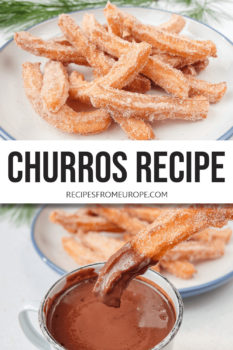 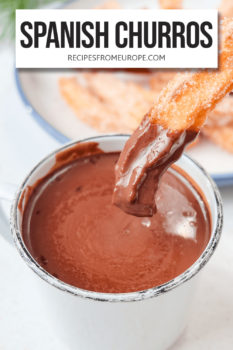 This Spanish Churros Recipe Is So Easy To Follow!

Want to bring a bit of sweetness and a bit of Spain into your home? Our easy Spanish churros recipe is the way to go!

These delicious deep-fried dough sticks are soft on the inside, perfectly browned on the outside, and coated in a sweet and layer of cinnamon and sugar.

Churros are a great dessert for company but they also just make a nice sweet snack – or even breakfast (if you want to do it the Spanish way).

Of course, you can eat churros on their own…. but in true Spanish fashion you really should dunk your churros in thick and creamy Spanish hot chocolate!

Churros are something that we love to enjoy every once in an while. For Lisa, there’s a deeper connnection.

While living in Spain, she would eat churros pretty frequently when meeting friends. Enjoying churros and hot chocolate while having chats with good friends is a great combination!

She even had a churros truck right outside her apartment during the month of December. However, Lisa also learned how to make them herself – it’s really quite easy!

Now, with this churros recipe, she gets to enjoy churros again – and bring a bit of Spanish culture to Eric!

Churros are a popular winter snack (at least they are in the north of Spain) but you can definitely enjoy them year-round.

For those wondering, churros actually have a long and fascinating history. While they are popular in Spain and Portugal, how they got there is somewhat of a mystery.

Some accounts credit Portuguese sailors with brining back the idea for fried dough from China.

Others credit the Arabas – who came to what is now Spain way back in the 8th century – for introducing the idea.

Whatever the true origin story of Spanish churros may be, we are just happy they exist.

They are traditionally made long but you can create smaller churros at home (depending on the size of your cookware!)

How to Make Spanish Churros – Step-by-Step

If you’re looking to make this delicious recipe for Spanish churros, you can follow the recipe card at the bottom of this post.

And if you are more of a visual learner and want to see how each step of the recipe looks, you can check out the process photos below!

First off, prepare your “work station” – that will make it easier later.

Place the sugar and cinnamon in a bowl with a flat, wide bottom. Also, take out two plates and places two papertowels on one of them.

Add the flour and a pinch of salt to a medium-sized mixing bowl. It’s important that it is heat resistant since you’ll be adding hot water later.

Heat the water and butter in a small pot on the stove until the butter has melted and the water is just boiling.

Make sure to stir regularly.

Pour the hot water over the flour in the mixing bowl in small increments while whisking with a whisk or a spoon.

Add more water slowly and mix well so that there are no clumps.

Keep mixing until the dough doesn’t stick to the sides of the bowl anymore.

Add the dough into a piping bag with a star tip.

Heat the oil in a medium-sized frying pan. Add enough oil so that the churros would be (almost) fully covered when frying.

You can test that the oil is hot enough by placing a wooden spoon into the oil. If small bubbles form around the oil, it is hot enough.

Once the oil is hot enough, turn the heat down to medium before adding the dough. You don’t want the outsides of the churros to get too brown too quickly while the inside is still raw.

Now squeeze the dough into the oil. You can make the sticks as long or as short as you want.

Once you like the length, cut the dough with a knife or a pair of scissors (that always works well in our case).

Fry the churros for a few minutes until they are golden brown on all sides. Remember to turn them occasionally.

We’d recommend not frying more than 4-5 churros at a time so they don’t stick together.

Once the churros are golden brown on all sides, remove them from the pan.

Place them on the plate with the paper towels so that the excess oil can drip off.

After around one minute, take a churro at a time and roll it in the sugar-cinnamon mixture until fully coated.

It’s important that the churros are still hot when being coated in the sugar so don’t wait too long!

When you are done, place the churros on the second plate and repeat the steps until you have used up all the dough.

We usually get around 15 churros with this recipe, but ours are on the shorter side. So depending on how long you make them, you might get slightly fewer.

We’d recommend only making the number of churros that you actually plan on eating – they don’t store well.

You could keep them for a couple of hours or so (if you must) but they don’t store well for longer. They get soggy quickly so it’s best to make them fresh.

If you enjoyed our Spanish churros recipe, here are some more classic Spanish recipes:

These Spanish Churros are the best sugary fried treat. Made from fresh, deep-fried dough, the churros are then coated in a layer of cinnamon and sugar for that extra bit of sweetness and spice! Don't forget to dip them in Spanish hot chocolate!
5 from 1 vote
Print Pin Save Saved!
Prep Time: 10 minutes
Cook Time: 20 minutes
Total Time: 30 minutes
Servings: 15 Churros

It’s pretty important that the oil is not too hot. You don’t want the outside of the churros to be very brown while the inside is still raw. That’s why it best to turn the heat down to medium once the oil has heated. This way inside of the churros gets enough time to actually cook before the outside gets too brown.

Course Desserts
Cuisine Spanish
Thanks for signing up, we’re so happy that you’re interested in our recipes! Please check your emails (including your spam folder) to confirm your subscription!