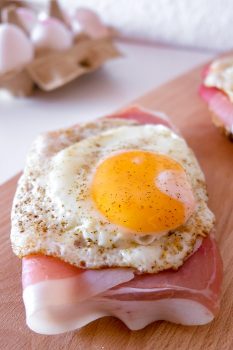 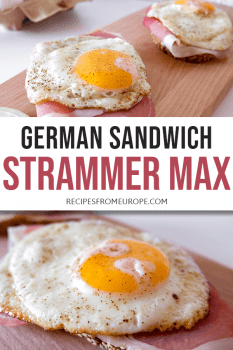 Looking to Make Strammer Max? Our German Shares Her Version!

If you are in need of a hearty and fast meal, look no further than Strammer Max. This German open-face sandwich is traditionally made with a darker German rye bread, a cured ham (like Prosciutto) and a fried egg on top!

Strammer Max is actually something that Lisa ate growing up in Germany. Lisa’s dad mainly used to make it for dinner but – given the ingredients – Strammer Max can also be eaten for breakfast/brunch.

The first time Eric was introduced to Strammer Max was when we were travelling in Germany and needed a brunch stop in Passau (alovely town in Bavaria on the Danube river). Let’s just say that he fell in love with it the moment the server brought it over! It was like a number of great elements of a North American breakfast all together on good German bread – and that was a good thing.

That said, Strammer Max is eaten throughout the country – and there are many different versions of it. There are a number of different darker breads to choose from. Rye is a very popular choice but you can also try others. When we made it to take the photos you see in this recipe post, we only had a “seedy bread” – usually we would make it with a darker bread without seeds. We like to garnish it with some thinly sliced onions for a bit of extra flavor.

Before you re-create Strammer Max, here are a few things you should consider/know:

There are lots of variations of this open-faced German sandwich. Instead of cured-ham, some people like to use cooked ham or Leberkäse (especially in Bavaria). Don't be surprised if you come across even more variations!

This nutritional information has been estimated by an online nutrition calculator. It should only be seen as a rough calculation and not a replacement for professional dietary advice. The exact values can vary depending on the specific ingredients used.

Pin it to one of your boards on Pinterest so you can come back to it any time!

Any cookies that may not be particularly necessary for the website to function and is used specifically to collect user personal data via analytics, ads, other embedded contents are termed as non-necessary cookies. It is mandatory to procure user consent prior to running these cookies on your website.