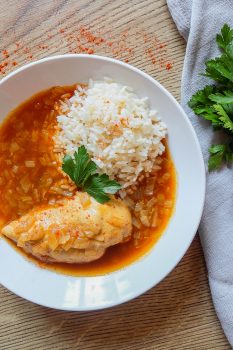 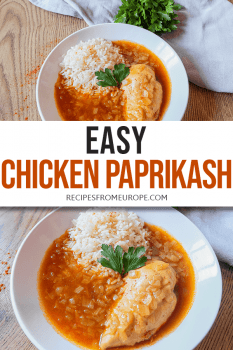 Searching for a hearty and flavorful dish that’s great in cold weather but will do any time? Chicken paprikash (Paprikás Csirke) – literally “Paprika Chicken” – is a classic Hungarian dish. Made from chicken and onions, it also utilizes the classic Hungarian spice paprika.

The rich red color of the dish is a dead giveaway for the spice from which the dish bears the name! Chicken paprikash is a versatile dish because it can be served with various hearty sides like boiled potatoes or egg dumplings (nokedli) – similar to German spaetzle.

Chicken paprikash is actually something Eric grew up eating. Lots and lots of it. That said, the recipe below is a simplified version compared to more traditional recipes for Hungarian paprikash.

This version is almost a “cheat” way to get the tastes of chicken paprikash with less work. We know that there are two major differences between this recipe and other variations of chicken paprikash. The first is the cut of chicken used. Some recipes use a boned-in, skin-on 1/4 chicken so as to get more flavor from the meat. The meat is also fried up before creating the broth to create a richer, fuller flavor.

Another big variation is what chicken paprikash is served with. Ours comes with a thinner sauce which goes well with rice. Rice is also very easy to make as the side.

That said, other versions serve up the chicken paprikash with a much thicker sauce – more like a thick stew – with Hungarian egg dumplings (nokedli) or potatoes. Some people also add actual chunks of red or green bell pepper to their broth so that there’s a vegetable present in the stew for added sweetness and texture.

This nutritional information has been estimated by an online nutrition calculator. It should only be seen as a rough calculation and not a replacement for professional dietary advice. The exact values can vary depending on the specific ingredients used.

Pin it to one of your boards on Pinterest so you can come back to it any time!

Any cookies that may not be particularly necessary for the website to function and is used specifically to collect user personal data via analytics, ads, other embedded contents are termed as non-necessary cookies. It is mandatory to procure user consent prior to running these cookies on your website.