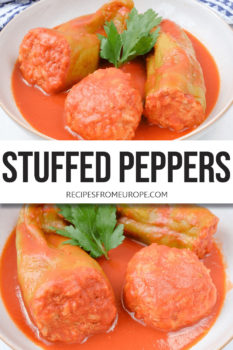 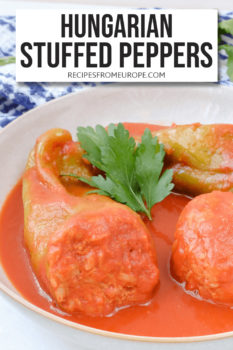 The stuffed peppers are then cooked and served in a simple yet well-spiced tomato sauce. The peppers and sauce pair really nicely with potatoes and/or bread!

We’ve got a number of Hungarian recipes on this site – courtesy of Eric’s grandmother. However, this stuffed paprika recipe was something he didn’t grow up enjoying.

In fact, this Hungarian stuffed peppers recipe was graciously shared with us by a good friend with Hungarian heritage.

Word has it this recipe for stuffed peppers was his Nagymama’s (grandma’s) recipe and it’s been passed down through the generations. We’re so grateful we get to share these stuffed Hungarian peppers with others!

When making these traditional stuffed peppers, there are a few things you should keep in mind.

Firstly, there are many different types of European stuffed peppers, so don’t be surprised if this recipe is quite similar or quite different from one that you may know!

You can use green bell peppers but we used green Cubanelle peppers. You can also use another color of pepper but green isn’t too sweet so you really taste the tomato and filling.

The biggest point of debate for most stuffed pepper recipes is what ratio the filling should be rice to meat.

This recipe below used more rice than meat but you can absolutely change this to suit your needs.

As we will point out when we make cabbage rolls (as made differently by two sides of Eric’s family), there’s a reason there’s more rice in the pepper stuffing.

Back in the old days, meat was expensive. So, to make the filling more “filling”, rice was substituted.

Of course, every family recipe is going to be different – and there will of course be differences by region or by country. Let us know in the comments below what ratio you used!

Remember to make some meatballs with any leftover filling you have so that none goes to waste. The meatballs cook up wonderfully in the tomato sauce, too!

If you’re want to make Hungarian stuffed peppers, you can check out the stuffed peppers recipe card at the bottom of this post for exact measurements.

For those wanting a little more step by step instructions, you can follow the recipe process photos below.

This way, you’ll have an idea of how your stuffed peppers look compared to our recipe!

First, wash the green peppers and cut the tops off. Then remove the middle section including the seeds.

This is what our peppers looked liked after we cleaned them.

You can definitely also use green bell peppers if you can’t find cubanelle peppers. Those will be easier to stuff, too.

Wash the rice and cook it according to package directions until it is half cooked. Remove it from the pot and let it cool.

Add the ground meat, half cooked rice, and medium-sized egg into a medium sized mixing bowl.

Add salt and pepper to taste.

Using your clean hands, mix everything together until well combined.

Then stuff the green peppers with the meat-rice-mixture.

It’s easiest if you take a little bit at a time and push it in with two fingers.

If you have any mixture left, you can form meatballs with it.

Of course depending on the size of your peppers, you might use more or less stuffing.

As you can see in the photo above, some of our cubanelle peppers were quite small so we had some meat-rice-mixture left over. So we just made some meatballs with it.

You can cut your celery stick into halves or thirds if it is too big, but don’t chop any of the vegetables into small pieces!

Place the celery stick, onion, banana peppers and crushed tomatoes in a large pot with a lid. Also add 1/2 teaspoon of salt.

Add the stuffed peppers – and meatballs if you made any – into the pot.

Now add enough water to the pot to almost fully cover the contents. In our case that’s usually around 4 cups, but it might me more or less for you.

Bring everything to a boil, then turn down the heat to medium-low.

Place the lid on top of the pot and let the mixture simmer for around 1.5 hours.

You can turn the peppers and meatballs a couple of times during this time.

Once the 1.5 hours are up and the peppers are soft, remove them and the meatballs from the tomato sauce.

If you can’t touch the vegetables with your hands, place them in a strainer and use a fork or spoon to squeeze out the juice into the pot.

Then discard the sequeezed celery, onion, and banana peppers.

In a small pot, make a light roux by melting one tablespoon of butter.

Then add the flour and mix well with a wooden spoon until there are no flour lumps.

Sauté the mixture until lightly golden brown. Watch carefully since it can get very dark quite quickly.

Then add approx. 2 tablespoons of water to the roux and mix thoroughly so that there are no lumps.

Add the roux to the tomato sauce and mix well. Bring the sauce to a low boil and whisk regularly so that there are no lumps.

Let the sauce simmer for a few minutes until the sauce has thickened. Then add a pinch of sugar (to bring out the tomato flavor) and salt to taste.

If you don’t want to make a roux, you can also dissolve a little bit of cornstarch in some water and add that to the tomato sauce. Just make sure to mix well so that there are no lumps.

Once the sauce has thickened, place the peppers and meatballs back in the pot and let them simmer for another 2-3 minutes.

You can serve these Hungarian stuffed peppers with potatoes and/or bread.

Enjoy this Hungarian stuffed pepper recipe – and remember, you can always adjust the meat-rice-ratio if you want more meat!

If you don’t eat all the stuffed peppers at once, you can store the leftovers in an airtight container in the fridge. They last for around 2 days.

For more great Hungarian recipes, check out these dinners, snack, and dessert recipes:

Hungarian Stuffed Peppers – or Töltött Paprika – are the perfect hearty meal. Made from fresh green peppers stuffed with a seasoned rice and pork blend, these peppers cook in a delicious homemade tomato sauce and can be served with bread or potatoes!
4.72 from 7 votes
Print Pin Save Saved!
Prep Time: 30 minutes
Cook Time: 2 hours
Total Time: 2 hours 30 minutes
Servings: 6

Course Dinner
Cuisine Hungarian
Thanks for signing up, we’re so happy that you’re interested in our recipes! Please check your emails (including your spam folder) to confirm your subscription!