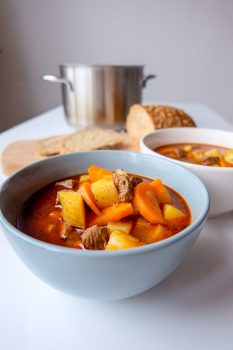 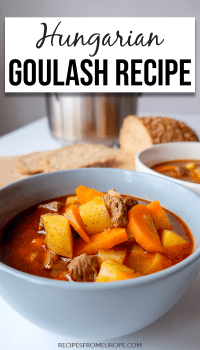 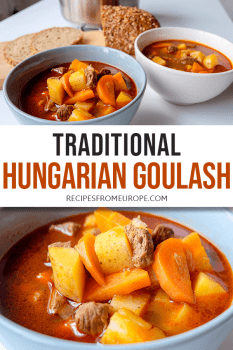 Here’s A Recipe For Hungarian Goulash – As Made By My Hungarian Grandmother!

If there is a recipe that sparks joy and warm feelings of comfort in some Europeans, it’s Hungarian goulash.

A national dish of Hungary, goulash or gulyás or “gulyásleves” (leves meaning soup) is a paprika-packed soup made with hearty but simple ingredients like potatoes, carrots, onions, and beef.

You can’t mistake Hungarian beef goulash with its signature red color that comes from a spice that is a key ingredient in Hungarian cooking – paprika!

Goulash is actually something that Eric grew up eating. The Hungarian goulash recipe below was made by his Mama (Hungarian grandmother who came to Canada from Hungary) and was passed along to Eric’s mother.

Growing up in Canada, there was nothing better than coming in from a long play session out in the snow to a steaming hot bowl of goulash!

The first time Eric visited Budapest – the Hungarian capital – he was actually recommended a place where he could find authentic goulash.

The small cafe/bar did not disappoint – serving up a bowl of goulash soup just like Mama used to make with a nice slice of bread.

Before you head off to cook up a big pot of goulash, here are a few things you should consider/know:

How to Make Hungarian Goulash – Step by Step Instructions

To make this authentic Hungarian goulash recipe, you can follow the recipe process photos in this section. That way, you can see exactly how we make our goulash soup.

If you’re feeling confident in the overall recipe process, you can skip down and find the detailed recipe card at the bottom of this post!

First, chop the onion, carrots and potatoes into small pieces. Set the vegetables aside.

Also cut the stewing beef into bite-size pieces if it isn’t already cut.

Heat up a large pot, add the oil and sauté the onion on medium heat for 5-10 minutes until translucent.

Now, add in the beef.

Sauté until the beef is browned and partially cooked. Stir occasionally to keep the beef from sticking too much.

After reducing the heat, 2 cups of broth until the mixture is covered completely. If two cups are not enough, add slightly more until the beef is fully covered.

Stir in the paprika and pepper to taste.

Place the lid on the pot and simmer the beef on low heat for one hour or until the beef is tender.

Simmer the mixture until the carrots and potatoes are soft. Make sure to not overcook the potatoes. Add salt and pepper to taste.

Remove the pot from heat and serve the goulash hot.

There are a few ways in which you can enjoy this easy Hungarian goulash. It tastes great with a few slices of fresh thick-cut crusty bread.

Of course, goulash can also can be served with egg noodles/dumplings (called Nokedli or spaetzle) or Hungarian pinched noodles (Csipetke) in the soup to make it more filling.

If you’re thinking “I’d make a thick version and serve it on boiled potatoes or Nokedli”, you might be thinking of beef stew which is called Marhapörkölt. Both are tasty – but we know this goulash more as a soup and not as a beef stew.

You can store cooled leftovers of goulash soup in a sealed container in the fridge. It’ll last for up to three days like this.

To reheat the goulash, you can place it in a pot and heat it up on the stovetop or separate portions and microwave them. You may have to add a bit more water/broth to the pot since the meat and vegetables can absorb it over time in the fridge.

You can also make a giant pot of goulash with the intention of having leftovers since goulash freezes well. Place the cooled goulash in a sealed freezer container. It will last in the freezer for up to three months.

You can take a container out the night before and place it in the fridge to thaw. You can then heat it up on the stove on low heat or microwave it.

What is Hungarian Goulash?

Hungarian goulash – also known as gulyásleves – is a traditional soup that originates from the nomadic plains people/Magyar herdsmen of modern-day Hungary. It is most commonly made from beef, potatoes, carrots, onions, and paprika – although there are many variations and ingredients used.

What is similar to Hungarian Goulash?

Unsurprisingly, there are some Eastern European soups that are similar to Hungarian goulash. Similar (and different variations) of the dish are found throughout the region – including in the Czech Republic and in Romania/Transylvanian region.

What meat to use in Hungarian Goulash?

Cuts of stewing beef are often used in goulash. “Stewing beef” is usually chuck or round beef that has been cut into smaller pieces – and it gets soft and tender when simmered in liquid.

What to serve with Hungarian Goulash?

Traditional goulash soup is served with a nice thick slice of crusty bread. That said, you can make the soup more filling by adding some egg noodles/dumplings.

What’s the difference between Hungarian Goulash and American Goulash?

For more great Hungarian recipes, have a look at these tasty dinner ideas:

Goulash or gulyás – the national dish of Hungary – is made with hearty but simple ingredients like potatoes, carrots, and beef. The bright color comes from the staple spice used in Hungarian cooking – paprika! It can be served on its own, with bread or on noodles.
5 from 1 vote
Print Pin Save Saved!
Prep Time: 10 minutes
Cook Time: 1 hour 15 minutes
Total Time: 1 hour 25 minutes
Servings: 4

Course Soup
Cuisine Hungarian
Thanks for signing up, we’re so happy that you’re interested in our recipes! Please check your emails (including your spam folder) to confirm your subscription!