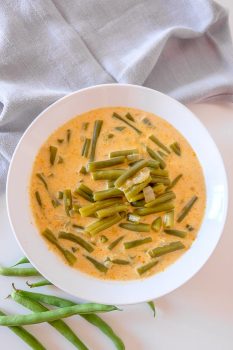 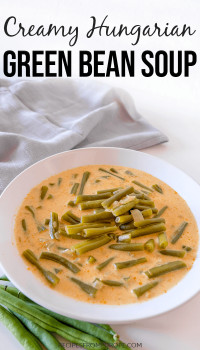 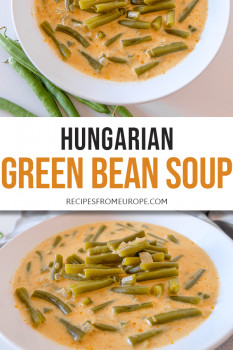 This Hungarian Green Bean Soup Recipe Was Passed Down By Family!

Hungarian cuisine is known for its love of soup – and this love dates back centuries. So, if you’re looking for a creamy green bean soup- or tejfölös zöldbableves as it is called in Hungarian – this is the recipe for you!

Made with crisp green beans, sour cream, and paprika, this bean soup is a lighter but warm addition to a meal – or can be served as a main meal itself.

The classic orange color comes from the mix of white sour cream and bright red paprika – a staple of Hungarian cooking and national identity.

This recipe is another one that was passed down by Eric’s Hungarian grandmother – or Mama. She used to make to when Eric was a kid and he remembers going to “Mama and Papa’s House” to eat it.

Years later, his mom has taken on the task of cooking up a pot of soup… and now the recipe has been passed down to make its way here. Not bad for a piece of knowledge that traveled to Canada from a small town in western Hungary.

Having said that, our family calls this green bean soup “bableves” (literally: bean soup) which is actually kind of incorrect.

Bableves is actually a more general term which describes soups that include beans. To complicate matters, there are other versions of bean soup in nearby countries like Romania and Germany!

But don’t worry because we will make many more versions of bean soup on this website and will try to get into the differences and similarities.

Even within this recipe for a creamy version of green bean soup, there are different variations – from the ingredients to how it is served. For example, you can eat it warm or chilled.

We personally prefer it to be warm. To make it more filling, you can add a meat like small pieces of smoked ham. You could also eat this soup with egg dumplings added into it. We’ll make egg dumplings and link them here when we do it.

Before diving into this fairly simple recipe, there are a few things you should consider: 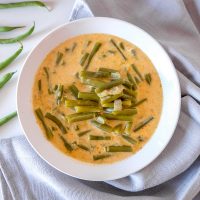 As a warm yet light dish, this creamy Hungarian green bean soup – or tejfölös zöldbableves – is sure to please. With its signature orange color, the soup is made from crisp green beans, sour cream, and Hungarian paprika.
4.60 from 30 votes
Print Pin Save Saved!
Prep Time: 15 minutes
Cook Time: 32 minutes
Total Time: 47 minutes
Servings: 3

Note that there are different types of paprika powder. If you don’t have access to sweet Hungarian paprika, you can also use the “regular paprika” you can find in grocery stores across North America. This will work but the flavor will not be as intense as when using authentic Hungarian paprika.

Course Soup
Cuisine Hungarian
Thanks for signing up, we’re so happy that you’re interested in our recipes! Please check your emails (including your spam folder) to confirm your subscription!