A Delicious Vegan German Potato Salad That Is Easy To Make!

Made from potatoes and onions and coated in simple flavors like mustard, vinegar, and oil, this warm potato salad recipe is super easy to make and it keeps well, too!

However, over the years, we’ve both developed a taste (and great appreciation) for vinegar-based potato salads.

Of course, that doesn’t stop us from enjoying creamy potato salad in the summer every once in a while!

Before you begin making this vegan German potato salad, you’ll need to think about the potatoes you use.

You need to use what we call “firm boiling potatoes” in German, i.e. potatoes that keep their shape and stay relatively firm when being boiled.

This is opposed to becoming completely mush out of the pot. So you’re looking more for a waxy type of potato such as yellow potatoes.

Originally, this Swabian potato salad is made with beef broth.

However, it’s also a super easy type of potato salad recipe to modify if you’re looking for an (almost) authentic version of a German potato salad without the animal products.

That’s why we made this recipe with vegetable broth instead of beef broth. The potato salad turned out really tasty so honestly no complaints here!

Speaking of Swabian Recipes: Delicious Spaetzle (German egg noodles) are from this region!

As we mentioned above, this is a good salad for summer barbecues. This is because vinegar-based potato salads don’t turn bad (as fast) when out in the sun for a few hours.

This is also a warm German potato salad without bacon and the absence of meat means it’s a little more resilient to warm temperatures.

Of course, leftovers should still be refrigerated immediately after use. It’ll keep for up to three days but the potatoes may get more and more soggy as time passes so keep that in mind.

Swabian potato salad is just one great German recipe that features potatoes or come in salad form. Check out these other great recipes: 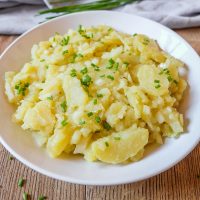 This super easy German potato salad is both delicious and flavorful. Made from a base of oil and vinegar – and not mayo – this potato salad is vegan and makes a great side dish to a hearty main!
4.67 from 3 votes
Print Pin Save Saved!
Prep Time: 20 minutes
Cook Time: 25 minutes
Additional Time: 1 hour
Total Time: 1 hour 45 minutes
Servings: 4 – 6 Portions