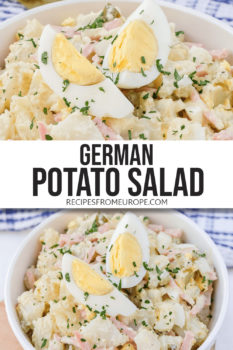 This German Potato Salad Is One Of Our Favorite Side Dishes!

This classic cold German potato salad is made from potato and egg – but it’s the addition of German meat salad (Fleischsalat), onion, pickles, and the dressing that take it over the edge on the delicious scale.

This is a filling German-style potato salad that makes a great side dish – or it can be enjoyed on its own!

Some German potato salads are eaten warm while others are eaten cold.

The creamy potato salad recipe is the version that Lisa grew up with and has made over the years. We think that it’s the best German potato salad – but of course, we’re a little biased!

To make this recipe, we’d advise to not use starchy potatoes. Use all-purpose white or waxy potatoes because they cook better and hold their shape better mixed in the salad.

Another key element to this Kartoffelsalat is that it’s made with German meat salad. This is something Lisa’s family includes in potato salad but not everyone does.

It can be almost impossible to buy authentic Fleischsalat in North America – that’s why we usually make our own.

If you don’t want to make Fleischsalat, you can always modify this potato salad recipe by including more mayo, more pickles, sliced ham, and/or chopped fried bacon.

Another key element to this potato salad is to let it sit in the fridge for at least two hours before serving it. This allows the flavors to mingle and the salad tastes so much better.

How to Make German Potato Salad – Step by Step Instructions

If you want to make this creamy German potato salad, you can find the recipe card at the bottom of this post.

For those who are visual learners and want to see the potato salad recipe process photos, you can find those photos below.

Simply add four raw eggs to a small pot, add enough water so that the eggs are covered and bring the water to a boil on the stove.

Let the eggs boil for around 10 minutes, then remove the pot from the stove, drain the water and immediately add very cold water to the pot to “shock” the eggs.

For the potatoes, place them into a medium-large pot and add enough water so that they are fully covered.

Add a pinch of salt, bring the water to a boil, and boil the potatoes for around 20-25 minutes until tender. Poke them with a fork to see if they are done – if the fork slides in easily, your potatoes are fully cooked.

Once the potatoes are boiled and peeled, cut them into small cubes and place these into a large mixing bowl.

To the mixing bowl, add the German meat salad (Fleischsalat). It’s quite easy to make your own at home.

However, if you don’t feel like doing so, you can simply add a little bit more mayo, a few more baby dill pickles, and a bit of fried bacon or cut up ham.

Now cut the peeled eggs into small cubes. Remeber to save one egg for decoration later.

Also cut the baby dill pickles and place the in the mixing bowl with the potatoes and meat salad.

Give everything a stir, then prepare the dressing.

Whisk everything together, then pour it over the potato mixture and stir well.

Taste the potato salad and add more salt/pepper and/or mayo to taste.

Now cover the bowl with a lid or some cling film and place it in the fridge for at least two hours.

Before serving you can garnish the salad with the last hard-boiled egg (cut it into quarters) and sprinkle some chopped parsley and/or paprika on top.

If the potato salad has been sitting out in the heat for a while (e.g. as a side dish for a potluck), we would recommend consuming everything the same day due to the mayo and meat in the salad.

If the salad has only been out of the fridge, when served for lunch/dinner, you can store leftovers in a container with a lid in the fridge for up to 2 days.

What is the difference between American and German potato salad?

To be honest, there aren’t huge differences between American and German potato salads.

Of course, vinegar-based potato salads may be more European by origin but there are absolutely authentic German potato salads that are definitely creamy.

As mentioned above, there are lots of regional variations of potato salads – both in Germany and America.

Can potato salad be made the night before?

Yes – but it depends on the kind of potato salad you are making. If it’s a warm potato salad (like our Swabian potato salad), it’s best to make it right before serving. This is because making it, cooling it, and then reheating it again might cause the potatoes to become too soft.

Creamy-based potato salads – that are generally served cold – can be made the night before and stored in the fridge. The next day, they serve well after chilling for a few hours and allowing the flavors to mingle.

What potato is best used for potato salad?

When making potato salad, a waxy or all-purpose potato is best. This is because waxier potatoes tend to stay together when boiled and do not crumble as easily. An example of a waxy potato would be a yellow potato.

What does German potato salad go with?

If you liked German potato salad, we’ve got lots of other potato-based recipes: 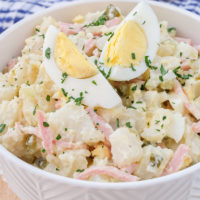 This creamy German Potato Salad makes the perfect side dish. Packed with potato and egg, this Kartoffelsalat is made with German meat salad, pickles, and overall deliciousness!
5 from 3 votes
Print Pin Save Saved!
Prep Time: 20 minutes
Total Time: 20 minutes
Servings: 4