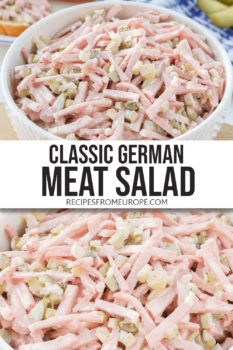 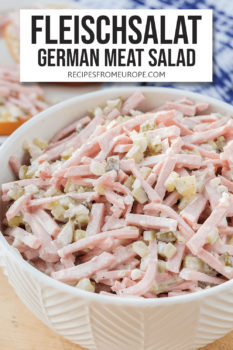 Fleischsalat Is a Classic German Recipe – Here’s How To Make It!

Looking for a hearty and meaty German lunch option? German meat salad – called Fleischsalat in German – is for you!

Made from fresh wurst and loaded with chopped pickles, this creamy meat salad gets its signature taste from its liberal use of mayonnaise!

Often eaten on bread or a fresh bun, it’s something you’ll find in German supermarkets and especially at the butcher shop!

Aside from being a popular brunch/lunch food, Fleischsalat can also play a role in a German dinner.

Lisa’s family eats Fleischsalat with boiled potatoes for a filling and easy dinner.

On top of that, this Fleischsalat is used as an ingredient in our super creamy German potato salad.

When making this Fleischsalat recipe, the meat you use – and the country you are in – is a big factor in determining the final taste of the meat salad.

This is because different countries will have different versions of similar meats.

If you are in North America, you could use widely available bologna for this recipe. However, German “Fleischwurst” (bologna) tastes different than North American bologna.

To get close to how the original would taste in Germany, we often use Italian Mortadella for this recipe when making it in North America.

North American Bologna and mortadella are similar products by consistency – Mortadella has more pork fat chunked throughout the meat blend – but the taste is a bit different.

If you have a European deli close to where you live, you might be able to get actual German bologna (Fleischwurst). If not, you can try it with mortadella to get a taste similar to German Fleischwurst or with classic North American bologna which will still be tasty.

How to Make German Fleischsalat – Step by Step Instructions

If you want to whip together some tasty Fleischsalat, you can find the recipe card at the bottom of this post with the exact measurement.

And if you’d like to see the recipe process photos so you can follow along step-by-step, you can check them out below.

This way, you can have a look to see if your German meat salad looks like ours did!

First, cut the mortadella or German bologna into slices. Of course, you can also buy already sliced wurst.

Then cut the meat into thin strips. Exactly how thin or thick you cut them depends on your personal preference, but we would recommend not cutting them too thick!

Place the strips of meat into a medium-sized bowl.

Now finely chop the onion if you decide to use one. We like the taste but not that same people don’t like the taste of raw onion. Make sure to chop it very fine so you don’t find large onion chunks in the salad later.

Add the chopped pickles and onion to the bowl with the wurst.

Mix everything together using two spoons. If the consistency is not creamy enough for you, you can add a little bit more mayo.

Now the important part: Cover the bowl and place it in the fridge for at least one hour.

This will allow the flavors to develop – the meat salad will taste much better after sitting for at least an hour (in our opinion).

Before serving, taste the Fleischsalat again and add more spices to taste.

Serve the meat salad, as a spread on a bun or slice of bread – or as a side to boiled potatoes.

Since this meat salad contains mayonaise, it is important that you store it in an container with a lid in the fridge and use it within 2-3 days.

This salad is eaten cold so you don’t have to worry about reheating it.

We wouldn’t recommend freezing the meat salad as this can greatly alter its taste and texture. Instead, only prepare the amount you plan on consuming.

For more German salad recipes check out these top dishes. Some are served cold, some are served hot, and others are classic tastes you want around the dinner table! 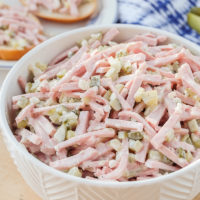 German Meat Salad – or Fleischsalat – is a classic lunchtime choice. Made from cuts of wurst mixed with chopped pickles, this salad – smothered in mayonnaise – is creamy, crunchy, and perfect on a slice of bread!
4.45 from 20 votes
Print Pin Save Saved!
Prep Time: 20 minutes
Total Time: 20 minutes
Servings: 6

Course Breakfast + Brunch
Cuisine German
Thanks for signing up, we’re so happy that you’re interested in our recipes! Please check your emails (including your spam folder) to confirm your subscription!