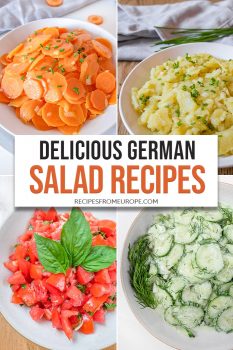 Here Are Some of Our Best and Authentic German Salad Recipes!

Need a great salad side dish? Consider a German salad recipe! There are lots of different authentic German salads out there.

However, there are also lots of original salad recipes that have been modified over the years and taken on new tastes and flavors.

In this article, you can find truly authentic German salad recipes that were – and to this day still are – made in Germany.

Since Lisa is German, we basically regularly make some form of German salad at home (it’s just what she grew up eating). So, these recipes are still what she’s making even now that we moved to North America.

Some of the most popular types of German salads that you might have heard of are German cucumber salad, German potato salad, and German tomato salad. Fear not, because you’ll find a recipe for each of these salads on this list.

As with many other recipes, there are, of course, different versions of these salads. Some Germans make oil and vinegar cucumber salads, while others prefer to add some sour cream.

So there really is not just one way to make the salad – the same as in North America when there are lots of different variations for different dishes!

Of course, there are also other German salads that you might not be that familiar with. Two salads that Lisa regularly made with her dad growing up are radish salad and herring salad. We’ll make them and put them up on the website very soon!

Other salads that are often eaten are simple German lettuce salads, beet salad, and asparagus salad (when it’s in season – asparagus is very big in Germany), along with many regional-specific salads.

Again, we’ll update this article as we add more German salads to our website – for now, enjoy the few that we have already up!

Made from a base of oil and vinegar – and not mayo – this potato salad is vegan and makes a great side dish to a hearty main! It originates in a region in Germany’s south called Swabia, but similar recipes exist in other parts of the country as well!

Get the Vegan Potato Salad Recipe

Another popular German salad recipe is a classic tomato salad. This German tomato salad is super easy to make and calls for just a few ingredients like fresh red tomatoes, onion, and lots of fresh basil. The tomato salad has a slightly sweet flavor and is best served chilled!

It’s a popular side dish during the summer months since it is so refreshing, but it is also consumed during the rest of the year. You can add authentic mozzarella or feta cheese if you want to make the salad slightly more filling.

Get the German Tomato Salad Recipe

This German cucumber salad is the perfect cold side dish and another classic German salad recipe. Made with fresh dill, onion, and just the right amount of creaminess, this salad is deliciously good!

There are many different versions of cucumber salads – some are made with oil and vinegar only while others (like this one) are slightly more creamy.

While similar to cucumber salads that can be found in other European countries (such as Hungary), the addition of dill is what typically differentiates this salad from others.

Get the German Cucumber Salad Recipe

This German carrot salad is a tasty addition to any meal and a family recipe that was passed down from one of Lisa’s grandmas. It’s quite simple to make and the softened carrots and onions create a unique flavor that also pairs well with hearty dishes!

The difference compared to many other carrot salads is that the carrot slices are boiled for just a few minutes – this changes the texture and flavor of the whole salad. It’s a family favorite that to this day is enjoyed regularly!

Get the German Carrot Salad Recipe