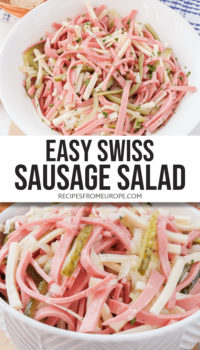 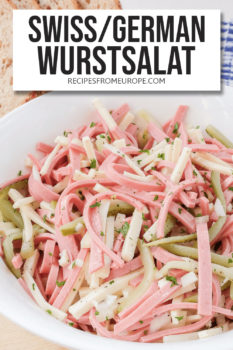 Here’s A Classic Wurstsalat Recipe To Try Out For Your Next Savory Snack!

Craving something meaty but want it to be quick and easy? Wurstsalat is the perfect dish for you!

Made from just a few ingredients – including wurst (sausage), cheese, onions, and pickles – this hearty snack salad is served with a simple vinaigrette dressing.

Our Wurstsalat tastes great with fresh crusty bread or soft pretzels for a classic “Brotzeit” (a German term for a savory snack or small, early dinner)!

There are a few different ways to make a Wurstsalat – many of which are differ by countries and/or regions.

Swiss Wurstsalat is usually made with both a sausage and a cheese component (like the one in this recipe).

German sausage salad (for example, Bavarian Wurstsalat) is often just made with sausage. However, you can often find the Swiss version with cheese on beer garden menus in Bavaria.

Case and point: Lisa ate this version in Aschaffenburg (Germany) when we went out for dinner to a local Brauhaus.

Another German version, the Swabian version, is made with both “regular” sausage and blood sausage!

Before you make this wurst salad, have a look at these few recipe tips so that you know what to shop for and keep in mind if you’re making this in North America:

How to Make Wurstsalat – Step by Step Instructions

For those wanting to get started making Wurstsalt, you can find the recipe card in the bottom of this post.

If you’ve never made this dish before and would like to see visuals, you can find the Wurstsalat recipe process photos in this section.

This way you get to see exactly how we made ours and can follow along!

First, cut the sausage into slices (if it isn’t already sliced) and then into thin strips.

Then also cut the baby dill pickles into thin strips.

If you decide to add cheese to your sausage salad, cut it into thin strips as well. If you do this, you’ll make a Schweizer Wurstsalat (Swiss sausage salad) – just FYI.

Next, peel the onion and chop it into very small cubes. Alternatively, you can also cut it into thin strips.

Place all the cut-up ingredients into a mixing bowl.

Now prepare the dressing. For that, add the white wine vinegar, oil, pickle juice, salt, and pepper to a small bowl.

Mix everything well then pour it over the ingredients in the large bowl.

Mix everything together until the sausage and cheese are evenly coated in the dressing.

Cover the bowl and place the sausage salad in the fridge for an hour so the flavors can mingle (this makes a big difference in taste, in our opinion!).

After the hour is up, remove the salad from the fridge, taste it, and add more salt, pepper, and/or vinegar to taste. Serve the salad with fresh soft pretzels or crusty bread.

The sausage salad should be kept cold and covered in the fridge before and after eating.

Any leftovers will last for up to 2 days but it’s better to consume them sooner rather than later.

If the sausage salad was left out in the sun for a while (e.g. during an outdoor picnic or barbecue), we wouldn’t recommend keeping any leftovers.

What’s the difference between Wurstsalat and Fleischsalat?

For more great German recipes, check out these classic (and very tasty) creations: 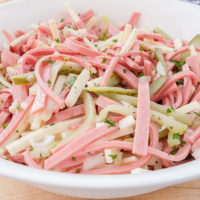