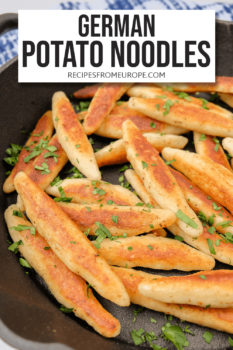 These Schupfnudeln Are Easy To Make And Super Filling!

These hearty potato noodles – sometimes called German gnocchi – are a perfect mix of potato and flour and can be enjoyed both savory and sweet!

We like to boil them and then pan fry them in butter and sprinkle on a bit of freshly chopped parsley.

These potato noodles are often confused for dumplings. And we can see why some might think they are dumplings due to their ingredients and cooking method (boiling).

Schupfnudeln are mainly enjoyed in the south of Germany and in parts of Austria, too. Lisa grew up eating them occasionally but it has been a while since she’s made them.

The first time Eric had them was when we made this recipe. Being a fan of gnocchi, he was a fan after just one Schupfnudel!

In case you’re wondering, Schupfnudeln also go by a few other regional names like Bubenspitzle.

How to Make Schupfnudeln – Step by Step

If you want to make delicious Schupfnudeln, you can find the recipe card with the exact ingredients and amounts at the bottom of this post.

For those of you who want to follow along with the recipe with photos, you can check out the Schupfnudeln recipe process photos below.

First boil your potatoes in a pot with hot water on the stove. It’s important that you use a starchy potato for this recipe.

Boil the potatoes until you can easily pierce them with a fork or butter knife.

Don’t pierce the potatoes with a sharp knife. When doing that, sometimes it can appear as if they are done because you can pierce the potato easily – but it’s really just because the knife is so sharp.

When the potatoes are done boiling, remove them from the pot and let them sit for a few minutes to cool. The peel them.

We usually pierce a potato with a fork and then hold it like that while peeling it with a sharp knife.

Add the peeled potatoes to a medium-sized mixing bowl and mash them with a potato masher.

Alternatively you can also press them through a potato press if you have one available.

Whichever way you choose, just make sure that there are no lumps left.

Add the flour, egg, salt, pepper, and nutmeg (optional) to the mashed potatoes.

Lisa grew up eating lots of potato dishes with nutmeg but if you’re not used to the taste you can just add a little bit or skip it completely. It’s completely up to you.

Use your clean hands to mix everything together until it is well combined and you can easily form a ball of dough.

Now separate the dough into two equal parts. That will make it easier to work it.

Sprinkle some flour onto your countertop and roll out half of the dough into a long sausage. The diameter should be approximately 1.5 inches.

Cut the “dough-sausage” into pieces that are approximately 3/4 inches long.

Now roll out the small dough pieces into rolls until they are approximately as thick as a finger. Then roll the ends of the noodles a bit thinner so that they have a tapered shape.

Fun side note: Schupfnudeln are sometimes also called “finger noodles” because of their look.

Use more flour as needed if the dough sticks to your fingers or the countertop.

Your Schupfnudeln don’t have to look perfect and you’ll figure out a way to do them that works best for you.

Lisa likes rolling them on the countertop and then just kind of pinching the ends with her fingers. Eric on the other hand prefers rolling the dough in the palms of his hands.

When you have used up the first half of the dough, repeat the steps with the other half.

Bring water to a boil in a large pot. Depending on how long it takes to heat water on your stove, you can already do this while you are still forming the noodles.

Add some salt and turn down the heat to medium-low when the water is boiling. The water should just boil very lightly.

Add around 1/4 to 1/3 of the noodles to the hot water. You’ll have to use your judgement here – basically give all the noodles the space to rise to the top when they are done.

Let the Schupfnudeln sit in the lightly boiling water for around 5 minutes until they rise to the top.

Remove them with a straining spoon and then boil the next batch. Repeat until you have boiled all of the noodles.

Optional: You can now fry your boiled Schupfnudeln in oil or butter and add other ingredients (see a few suggestions in the section below).

We like to keep it simple and fry our noodles in butter on medium heat until they are golden brown on the sides.

Later we like to add some parsley for a pop of color and fresh taste. Sometimes we also eat them with a simple tomato sauce.

And if you’re wondering about why our Schupfnudeln have these dark spots in the photo above – it’s because we used pretty coarse pepper.

As we mentioned, you can prepare Schupfnudeln to be savory or sweet – but the basic noodle recipe is the same.

If you want to enjoy them sweet, you can for example fry them in butter and breadcrumbs and then sprinkle sugar over them.

You can also fry them in butter, then halfway through add sugar (and maybe some cinnamon). Or serve them with lightly boiled berries or apple sauce on the side.

If you want to enjoy them savory, you can use them in a variety of dishes similar to how you would use normal potatoes or even pasta.

They taste great fried with Sauerkraut or fried vegetables of your choice. You can even add some meat such as cut-up sausages or chicken if you want to have a meat component.

Schupfnudeln taste best when they are fresh. But you can also store them in the fridge for around two days afterwards.

Alternatively, you can freeze them after boiling (but before frying) and then just drop the frozen noodles into boiling water when you want to eat them.

Rich and filling, these Schupfnudeln – or German Potato Noodles – are a delicious dish. Easy to make from a combination of potato and flour, these noodles are served sweet or savory. We love them pan-fried in butter and served with freshly chopped parsley!
4.84 from 6 votes
Print Pin Save Saved!
Prep Time: 20 minutes
Cook Time: 15 minutes
Additional Time: 25 minutes
Total Time: 1 hour
Servings: 4