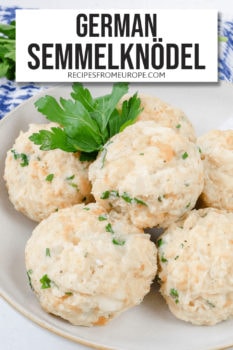 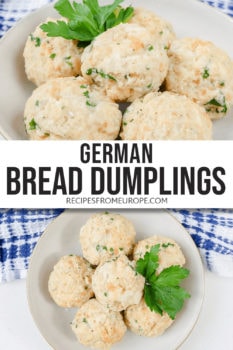 These Semmelknödel Make The Perfect Addition To A Hearty Meal!

Nothing says “fill me up” like traditional German bread dumplings!

These delicious boiled bread dumplings – known as Semmelknödel in German – are created with just a few easy ingredients like old buns, egg, onions, and parsley.

Semmelknödel taste great with mushroom gravy or as an addition to meat-based dinner dishes like roasts or even venison.

Interestingly, these bread dumplings are mainly eaten in the southern part of Germany.

Lisa grew up eating Semmelknödel occasionally. However, she usually had Kartoffelklöße (German potato dumplings) since they were more popular in the region she lived in.

We also had authentic Semmelknödel at a Brauhaus in Munich and they were just absolutely perfect.

Sometimes you can also find a dumpling called “Serviettenknödel” on the menu. It’s made from the same dough as these bread dumplings.

But instead of forming small dumplings, you basically make one huge dumpling and then cut slices from it. Maybe we’ll put a separate recipe up for that soon!

If you want to whip up a batch of Semmelknödel, this bread dumplings recipe is actually really easy to tackle.

The biggest factor that you need to consider beforehand is having hardened bread rolls or some French baguette at home.

That’s important because the Semmelknödel recipe doesn’t really work with fresh bread rolls. You can even make your own German bread rolls (Brötchen) at home and then just let them harden up a bit.

Another thing to consider before you make Semmelknödel is what to serve them with.

Again, meat dishes like roast beef, roast duck, or even German goulash go well but there are many other options to pair these dumplings with.

How to Make German Bread Dumplings – Step by Step

If you want to make delicious Semmelknödel, you can check out the recipe card at the bottom of this post.

And in case you are more of a visual cook, then you can follow along with the recipe steps and the process photos below.

This way, you can get an idea of whether you’re on the right track with your bread dumplings!

First, make sure to use bread rolls or baguette that has hardened for a day or two – or at least overnight.

Cut the hard bread rolls into small pieces and place them into a heat-resistant bowl.

Pour milk into a small pot and heat it on the stove until it is just about to boil.

Remove the pot from the heat and pour the milk over the bread pieces in the bowl.

Give the mixture a quick stir, then let it sit for 15 minutes.

In the meantime, chop the parsley and the onion into small pieces.

Melt butter in a medium-sized frying pan and sauté the onion until it is translucent. Stir regularly.

Once the onion pieces are translucent, remove the pan from the heat and set the onion aside.

Crack the eggs into a small bowl and whisk them with a fork until uniform in color.

After the bread is done soaking, add the sautéed onions, chopped parsley, whisked eggs, salt, pepper, and nutmeg to the bowl with the breadcrumbs.

Mix everything together using a wooden spoon and/or your clean hands.

Form a small ball with the dough to test the consistency. It should be relatively easy. If the mixture feels dry and falls apart, add a splash more milk.

On the other hand, if the mixture is overly sticky, add some breadcrumbs.

Fill a large pot with water and some salt and bring it to a boil.

While you are waiting for the water to boil, form 8-10 dumplings in the palm of your hands. Try to make them roughly the same size.

You can set them aside on a plate while you wait for the water to boil.

Once the water starts boiling, turn down the heat to medium-low.

You want the water to be just under boiling, but don’t want any large bubbles. In German, this is called “siedendes Wasser”.

Add the dumplings to the hot water and let them sit for approx. 20 minutes. Make sure that there is enough room for all of them to “swim at the top”. If not, either use two pots or cook them in two rounds.

Once they are done, remove them from the water and serve them hot. As mentioned, they taste great with any roast that has gravy and a mushroom sauce for vegetarians.

If you have leftover bread dumplings, you can store them in the fridge overnight. Then cut them into slices and fry them in some oil or butter the following day.

These delicious German bread dumplings – called Semmelknödel – are the perfect dinner idea. They are easy to make, are a great use for old bread, and pair perfectly with meat dishes with gravies!
No ratings yet
Print Pin Save Saved!
Prep Time: 30 minutes
Cook Time: 20 minutes
Total Time: 50 minutes
Servings: 8 dumplings