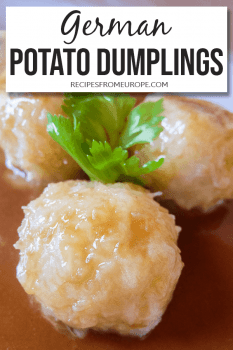 It’s only fitting that we have a recipe for German potato dumplings on a site about European recipes created by a German!

This classic German dish can be tricky to master but when done right, potato dumplings are so tasty. They are usually served up with a meat-based dish and the gravy that goes with it.

If you are new to potato dumplings (you might also know them as German potato balls), it’s important to know that there are actually lots of different potato dumpling recipes in Germany.

In some parts of Germany, Kartoffelklöße or Knödel – as potato dumplings are called in some regions – are not known at all!

For many years, potato dumplings were a staple of Sunday lunch with the (extended) family. In this guide, we’ll show you how to make a type of Franconian potato dumplings specific to the region of Coburg where Lisa is from.

While some German potato dumpling recipes include eggs, our recipe does not and is kept very simple.

However, unfortunately, it is still easy to get something wrong – so it is very important to be patient when making this recipe and not be disappointed when it doesn’t turn out perfectly the first time. Try again!

And to give you the best chance for it turning out well, we’ll walk you through everything step-by-step (including photos!).

Over the years, Lisa learned from her grandparents how to make these delicious potato dumplings.

Eric became a fan of dumplings the first time he ever had them – they were served up with another classic meat dish called Roulade!

Since the process of making potato dumplings can be tricky to explain, here are the step-by-step instructions with photos.

This way, you can follow along and see if what you are doing is right! We are keen to add in a recipe video in the future!

Fry up some croutons (yes, like fried bread) to place in the middle of the dumplings.

This is just old bread fried in oil and is completely optional but it’s a tasty addition! We’re a fan of the crouton addition, though.

If you’ve got more old bread, you can make another type of German dumpling – Semmelknödel (German bread dumplings)!

Wash and peel those potatoes – remember to save one half for shredding while cutting the other part into halves or quarters (depending on the size) before boiling them in hot saltwater for around 20 minutes until cooked.

Once the potatoes are cooked, mash them with a potato masher or – if you have one – put them through a potato press to remove any potato lumps.

Place all the raw grated potato into the “potato sack” – alternatively a cloth bag or kitchen towel – and squeeze out all the liquid.

Alternatively, you could also use a juicer to do this. Just remember that you will need the juiced potato going forward! Set the still covered potato ball aside until you need it again.

Make sure you capture the squeezed out potato water and let it sit for at least 10 minutes. Then gently tip the bowl to drain the liquid. You will see the white starch settled in the bottom. You want that starch for later!

Now, you are ready to combine all the ingredients. Dump the raw potato ball into a large mixing bowl and break it up a bit. It should be pretty dry at this point.

Add the cooked potato, the salt, a pinch of nutmeg (optional), and the potato starch (from the bowl of squeezed raw potato liquid). Begin mixing this together and add the required hot water as you go.

Mix all these ingredients vigorously for at least 5 minutes until they are completely combined in the bowl and looking like one smooth “batter”.

Form the potato dumplings into little balls with your hands. They should be just slightly smaller than your palm. Use a little cold water on your hands to keep them from sticking to your palms.

If you want to add croutons, take a 3-4 and use two fingers to push them into the middle of the potato ball. Then close the hole and reshape it. It’s important to make sure that there are no cracks/holes so water doesn’t enter the dumpling in the next step!

Gently place the formed dumplings into the hot water – which is salty and just shy of boiling. It’s important that the water is not boiling! The dumplings should not break apart in the water (if this is the case, add some cornstarch to the “batter”).

They will sink to the bottom first but will rise after about 5 minutes. Leave them in the water for another 15 minutes before removing them. Serve them immediately. Voila – you are done making this style of German potato dumplings!

If you’re not familiar with potato dumplings, you might have some questions. We’ll try to answer some common ones in this section, but feel free to leave a comment below if your question is not answered!

What do you eat with German Potato Dumplings?

Potato dumplings are eaten with all kinds of meats and meat dishes, for example Roulade, Sauerbraten, or even grilled chicken. You pretty much always eat them with some form of gravy, too. Sometimes, they are also served with a side of red cabbage.

Can I reheat Potato Dumplings?

Yes, you can – but they don’t taste that great at least in our opinion. A great way of eating leftover potato dumplings is to cut them into slices and then fry them in oil the next day. This is called Kartoffelpuffer – and it is very similar to our German potato pancake recipe. This used to be one of Lisa’s absolute favorite meals when she was a kid. Tastes great with apple sauce! 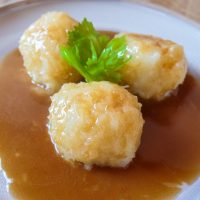 While there are many different kinds of German potato dumplings, these authentic Franconian-style potato dumplings are perfectly starchy and soft. They serve well with meat dishes like roulade – and don't forget the gravy!
4.72 from 7 votes
Print Pin Save Saved!
Prep Time: 50 minutes
Cook Time: 20 minutes
Total Time: 1 hour 10 minutes
Servings: 5

Looking for more German potato recipes? Have a look at these: