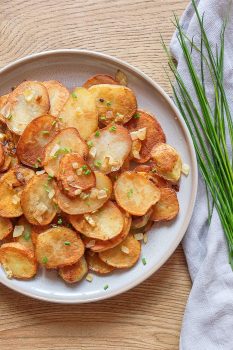 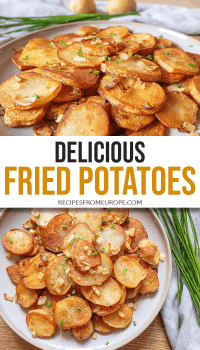 If you are looking for a great side dish and craving German potato recipes, then German fried potatoes are for you!

Also called Bratkartoffeln in German (literally meaning “fry potatoes”) or even German home fries, these German-style potatoes are pre-boiled then fried to perfection.

These delicious little golden discs are soft on the inside and crispy on the outside – and served with meat dishes or just with some spices or ketchup for dipping!

This recipe for fried potatoes comes from years of experience. We both grew up eating German fries but didn’t realize this until we made this recipe together.

Lisa ate them as a kid growing up in Germany. These fried potatoes make a great side dish for meat-based dishes like Schnitzel. That said, you can also just eat them on their own as a large snack or a side dish for non-meat dishes.

Eric also grew up with his mom making a similar version of these fried potatoes. They were always a side dish to homemade hamburgers.

When you set out to try this German fried potato recipe, you should make sure to figure out which type of potatoes you have on hand. The best potatoes to use are waxy potatoes.

This is because waxy potatoes tend to stay together during/after boiling and tend to brown well.

Otherwise, the potato slices likely won’t get nicely golden brown and crispy. If the potatoes are too starchy, they might get too mushy when you try to fry them in the pan.

When you go to serve these fried potatoes, you have endless options for seasonings. They serve great with some fried/crispy onions – but you can top them however you like.

We are a big fan of freshly cut chives but if we don’t have any around, a little salt and pepper (or even seasoning salt) works perfectly, too.

You can even dip them in a favorite sauce. Ketchup is an easy choice but a chipotle mayo would also be fantastic!

It’s best to enjoy these German potatoes fresh and not have leftovers. This is because once they cool, they can become soggy.

If you do have leftover German potatoes, put them in a sealed container in the fridge, and be sure to eat them the next day. They won’t be very crispy but heated in a frying pan with a little bit of oil or butter will help bring them somewhat back to life.

What are German-style fried potatoes?

German-style fried potatoes are thinly sliced potatoes fried in oil to achieve a golden exterior color. The potatoes are often pre-boiled to soften the inside to reduce frying time and help avoid burning.

How do you soften potatoes before frying them?

You soften potatoes before frying them by boiling them until tender.

Is it necessary to boil potatoes before frying?

Not always, but German fries are often boiled beforehand so that when it comes to frying, you only have to worry about achieving a golden brown outside and not cooking the inside of the potato slice during the fry.

What kind of potatoes to use for German home fries?

A waxy potato is best for German fried potatoes. In German, these are called a “firm-boiling” type of potato. An good example of a waxy potato would be a yellow potato.

For those craving more German potato recipes (we won’t judge), here are some great recipes that include potatoes in different forms: 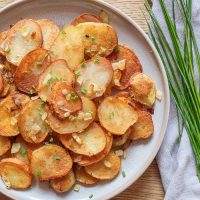 Delicious German fried potatoes are always a hit. Soft on the inside and perfectly crispy on the outside, these golden brown potatoes go great as a flavorful side dish to a main meal. They serve with a few fried onions and/or classic sauces like ketchup!
4.25 from 4 votes
Print Pin Save Saved!
Prep Time: 10 minutes
Cook Time: 20 minutes
Additional Time: 20 minutes
Total Time: 50 minutes
Servings: 4