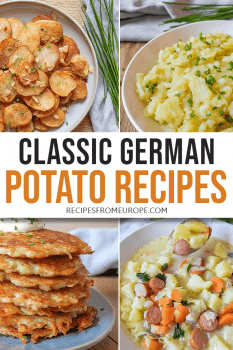 Lots of German Potato Recipes to Give You Tasty Ideas!

Do you love potatoes? Are you looking for a list of amazing potato recipes? Well, then you are in the right place.

German cuisine has a number of staple ingredients – and potatoes are definitely one of them. That’s why we’ve ended up creating loads of different German recipes that include potatoes as a key element.

Of course, it’s easy to understand why Germans love their potatoes. Potatoes were (and still are) a relatively easy crop to produce.

They are relatively resilient, don’t require excess effort and costs (compared to other crops), have a decent shelf life, and provide quite a bit of nutritional value per yield.

Basically, potatoes helped keep people alive in times of famine throughout the centuries. This just means that recipes have been passed down for generations – and we are the recipients of these potato recipes whether mashed, boiled, fried, or stewed!

Understandably, many of these German potato recipes are inspired by Lisa’s upbringing or our travels – and we’ve certainly been lucky enough to try lots of different recipes.

Whether it was Lisa’s grandmother making potato dumplings or us eating potato pancakes at a classic German Christmas market, we’ve enjoyed potatoes more than you might think!

So, below is a collection of our delicious German potato recipes. These have been tried and tested so we are confident sharing them. We’ll add to this post as we create/uncover more so be sure to check back often!

These hearty, crispy fried potato pancakes are simple to make and delicious to eat! Served best hot, these pancakes can be eaten with a sweet apple sauce, a savory garlic sauce, or even a creamy quark!

We love these potato pancakes because they are such a simple comfort food. They go great on a weekend morning for brunch… or you can just fry them up for dinner if you are craving potatoes!

Get the German Potato Pancake Recipe

This delicious German potato soup recipe is loaded with goodness – from potatoes, carrots, and leeks to celery root, sausage, and lots of freshly chopped parsley. Served hot, this soup makes a tasty appetizer or can be served up as the main course itself!

We love this soup because the broth is light but it still turns out creamy so it’s a nice mix of hearty and light at the same time! You can also make it vegetarian or vegan by skipping the sausage and using vegan cooking cream!

Get the German Potato Soup Recipe

While there are many different kinds of German potato dumplings, these authentic Franconian-style potato dumplings are perfectly starchy and soft. They serve well with meat dishes like roulade – and don’t forget the gravy!

There are SO many different types of German potato dumplings but we really like this version. Don’t be afraid to compare and try out different potato dumpling recipes until you find one that you really enjoy.

Get the German Potato Dumplings Recipe

A creamy potato soup is a really great dish for when the weather turns cold.

This smooth and delicious soup is made from blended potato, leek, carrots, and celery. With a bit of rich cream, it’s a fragrant and hearty soup that is pretty easy to make.

Be sure to add on some freshly chopped parsley and/or some freshly-made pan fried croutons for an added crunch!

Get the Creamy Potato Soup Recipe

Delicious German fried potatoes are always a hit. Soft on the inside and perfectly crispy on the outside, these golden brown potatoes go great as a flavorful side dish to a main meal. They serve with a few fried onions and/or classic sauces like ketchup!

Funny enough, these fried potatoes were also eaten by Eric growing up so we can confirm that this is a super tasty recipe that pleases most guests!

Get the German Fried Potatoes Recipe

Popular in Germany and parts of Austria, Schupfnudeln are a delicious dinner options. Similar to a type of gnocchi, these German Potato Noodles are pretty easy to make.

With a combination of potato and flour, you can enjoy these noodles in many different ways from savory to sweet.

We really like our Schupfnudeln pan-fried in butter and with a touch of fresh parsley sprinkled on top!

This super easy German potato salad is both delicious and flavorful. Made from a base of oil and vinegar – and not mayo – this potato salad is vegan and makes a great side dish to a hearty main!

We also like creamy versions of potato salad but this vinegar version is lighter and goes well with lots of different dishes… Of course, we have been known to eat the whole bowl ourselves.

Get the Vegan Potato Salad Recipe

This classic cold German potato salad is made from potato and egg – but it’s the addition of German meat salad (Fleischsalat), onion, pickles, and the dressing that take it over the edge on the delicious scale.

It’s also these items that differentiate this potato salad from the vegan style of salad above!

This is a filling potato salad that makes a great side dish – or it can also be enjoyed on its own!

Get the Creamy Potato Salad Recipe