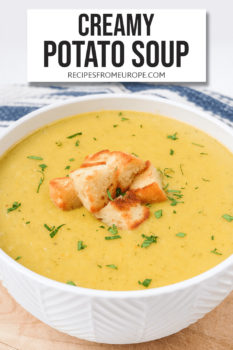 This Creamy Potato Soup Is Like A Warm Hug For The Tummy!

Looking for an easy creamy potato soup recipe? This recipe – made from a few simple vegetables and some cream – is the perfect stove-top potato soup.

Done in a German-style, this hearty soup is wonderful to whip together when the weather gets cold.

Finished off with fresh parsley and homemade croutons, it’s a creamy German potato soup that is easy on the budget and on the taste buds.

We’re always drawn to simple soup recipes. This is probably because we both grew up eating lots of different soups.

We called this potato soup “German-style” in the title since Lisa has learned to make it like this when growing up in Germany.

In North America, creamy potato soup might traditionally be prepared differently – so we just wanted to give reader’s a heads-up.

When making this recipe, you just have to remember that you need some sort of blender. We used a normal blender but an immersion blender would also work just fine.

Also, you can spice this soup however you like.

Despite the recipe, you will inevitably choose different-sized leeks, potatoes, carrots, etc. so feel free to use salt, pepper, and parsley as per your taste buds!

How to Make Creamy Potato Soup – Step by Step

If you’d like to follow along with photos, you can check out the process photos below. It’s an easy creamy potato soup so you shouldn’t have any trouble.

Start by peeling and cutting your potatoes into small cubes. The exact size doesn’t matter since you’ll be blending the soup later anyway.

However, if you cut them into smaller, somewhat equally sized pieces you can be pretty sure that they will be done cooking at the same time.

Next, also wash the celery, carrots, leek, and parsley. Cut the celery into slices and do the same with the carrots. You can peel the carrots or not – it really depends on your personal preference.

Make sure to wash the leek really well since it can have quite a bit of dirt between the individual layers – and you don’t want that in your soup. Then cut the leek into rings.

Also, chop the washed parsley into small pieces and set it aside. At this time, you also want to chop the large onion if you haven’t done so yet.

In a large pot, heat the oil and sauté the chopped onions on medium heat until translucent in color. Stir regularly.

Now add the other vegetables (celery, leek, potatoes, and carrots) to the pot and sauté them for 2-3 minutes as well.

Then fill the pot with enough vegetable broth so that it just covers all the vegetables in the pot.

In our case that is usually around 7 cups of broth. However, this might vary depending on the size of your pot and the size of the vegetables you used.

At this point also add the parsley and give everything a good stir. Then place the lid on the pot and bring everything to a boil.

Once boiling, turn down the heat and let the soup simmer for around 20 minutes until the vegetables are soft. Stir occasionally.

After the 20 minutes – or once the vegetables are soft – add the whipping cream as well as salt, pepper, and nutmeg (optional).

So, if you’re not sure if you would enjoy the taste, maybe just try a little bit or feel free to skip it entirely.

Remove the soup from the stove and ladle parts of the soup into a blender. Be careful not to burn yourself and don’t add to much soup to the blender at once.

Alternatively, you can also use an immersion blender if you have one and just puree the soup in the pot.

You can either blend all of the soup (which is what we did) or piece some of the some as is. This way you have some nice vegetable chunks in your soup.

Pour the blended soup back into the pot – or another pot if you are blending a little bit of soup at a time.

You can also make some croutons to serve with the soup which are usually our highlight.

Just cut some hard white bread, crusty rolls, or baguette into small cubes and fry them in a pan with some butter until golden brown.

You can store the leftovers of this potato soup in an airtight container in the fridge for up to three days.

Alternatively, you can also freeze portion-sizes in a freezer container and then thaw them as needed.

If you liked this creamy potato soup, here are a few more delicious soup recipes to try out:

This creamy potato soup is the perfect cold-weather dish. With tasty potato, leek, carrots, and celery blended together with a bit of cream, it's a hearty soup that is so easy to make and keeps you full!
5 from 1 vote
Print Pin Save Saved!
Prep Time: 30 minutes
Cook Time: 25 minutes
Total Time: 55 minutes
Servings: 6