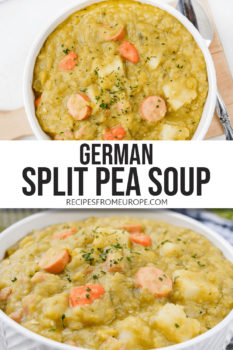 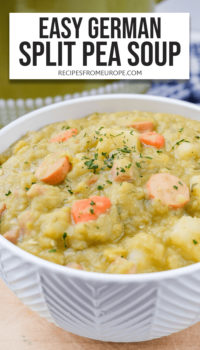 This German Split Pea Soup Is Filling And Really Easy To Make!

If you’re looking for a warm and thick soup you can really sink your teeth into, try this Split pea soup.

Made from soaked split peas and lots of freshly chopped vegetables like carrot, leek, potato, and celery, this soup – known as Erbsensuppe in German – includes European-style wieners for an authentic meaty taste.

You can garnish this German pea soup with a little bit of chopped parsley for a pop of color.

Split pea soup is pretty popular in Germany. It’s very much a classic “Oma recipe” that the older generation would make.

This is partially because split peas – which are dried and peeled green peas – last long in storage and are full of good calories that keep you full.

Split pea soup is a soup Lisa grew up eating in the south of Germany. So, we’re happy to have recreated it here!

Before you run off to make this German pea soup recipe, here are a few things to consider:

Not all split peas are the same so keep this in mind when looking at our cooking times and adjust, if needed.

We like our vegetables softer but some like them with a bit less tender. If this is you, add the vegetables with the potatoes after the peas have simmered for a bit.

We like using European wiener for an authentic taste (as close to Germany as we can get) but any cooked sausage can be used.

If you can find celery root (as opposed to green celery stalks) then you can also use them – celery root is more traditionally German anyway!

In case you can get your hand on authentic German “Schinkenspeck” feel free to use that. We have found that pancetta bacon is a great alternative that is often readily available in North America.

However, if you can’t find pancetta bacon either, you can cut a couple of slices of thick-cut bacon into small pieces or try a bit of pre-cooked ham for extra flavor (we have not tried this yet, though).

If you want to make this thick and delicious split pea soup, you can check out the recipe card at the bottom of this post for a full list of ingredients and measurements.

For those wanting to follow the step by step instructions with visuals, you can see the recipe process photos below.

It’s best to soak the split peas first since this reduces their cooking time noticeably.

So first, wash the split peas in a strainer under running water, then add them to a pot or a large container with a lid.

Add enough water so that it covers the split peas generously. Then put the lid on and let the peas sit for around 12 hours.

After the peas have soaked and are ready to be cooked, peel the onion and chop it into small cubes.

Also, cut the pancdetta bacon into small pieces if you haven’t bought it pre-cut.

Peel the carrot and wash the celery. Cut everything into small pieces.

Next, wash the leek really well since it can be quite dirty. Then cut it into rings.

In a large pot, heat a little bit of oil. Then add the pancetta bacon and fry it on medium-high heat until the fatty pieces appear translucent

Then add the onion pieces and sauté them until they are clear and the pancetta bacon is lightly browned.

Now add the carrot, celery, and leek. Give everything a stir, then sauté them for around 2 minutes as well.

If you want your vegetables to keep a bit of a crunch, don’t add them yet – add them with the potatoes later!

At this time, add the soaked split peas – including the water they soaked in – to the pot.

However, depending on the size of your pot, the vegetables, and how much water you used to soak the peas, you might need slightly more or less.

Now bring the soup to a boil. Once boiling, add the lid and turn down the heat to low. Let the soup simmer for around 25 minutes until the peas are semi-soft. Make sure to stir occasionally.

In the meantime, wash and finely chop the parsley.

Also, peel the potatoes and cut them into small cubes.

After the soup has simmered for around 25 minutes, add the potatoes and the chopped parsley. Give everything a stir, then let the soup simmer for another 30 minutes.

If you didn’t add the other vegetables at the earlier stage, add them now. Also add some more vegetable broth as necessary.

When the soup is almost done, cut up the wiener sausages. Add them to the soup and give everything a stir. You can also leave the sausages whole if you prefer it this way.

Let them heat for around 5 minutes. At this time, also add salt and pepper to taste.

Serve the soup hot. You can garnish it with a little bit more chopped parsley if you want.

You can store leftovers of the split pea soup in the fridge for around 2 days. Just make sure to store them in an airtight container with a lid. Also, make sure that the soup has cooled first before placing it in the fridge.

Reheat the portions you want to eat in a pot on the stove (our preferred method) or in the microwave.

Just be sure to give the split pea soup a stir before ladling it out to reheat it since the solids and water can separate a tad. You might also have to add a little bit more water to the pot/the bowl.

Alternatively, you can also freeze (some) of the soup. We would recommend doing so in portions. This way you can easily thaw and heat it quickly in a pot on the stove on low heat.

Do split peas need to be soaked before cooking?

Ideally, yes. Soaking the split peas softens them to be ready for cooking. Unsoaked split peas will take a long time to soften while cooking and this will undoubtedly throw off the recipe (overall cooking time, tenderness of vegetables, amount of water needed, etc.)

Can I substitute lentils for split peas in soup?

Sure, but then it’s not split pea soup. It’s lentil soup – and the cooking time will vary based on the type of lentils used.

Can you use whole dried peas instead of split peas?

Sure – but then it’s not split pea soup. Also, don’t expect the soup to turn out creamy. Whole peas will tend to stay together and the resulting broth will be thinner than in a split pea soup.

How do you make split pea soup from scratch?

To make split pea soup from scratch, wash and soak the split peas overnight, then cut and boil the vegetables, peas, and any meat in broth. You can find the detailed recipe instructions for split pea soup below.

For more authentic German recipes, check out these other tasty creations: 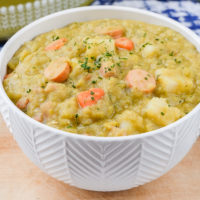