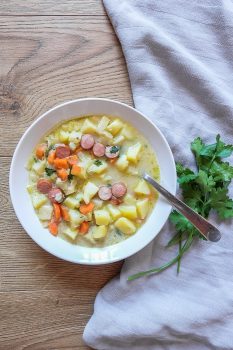 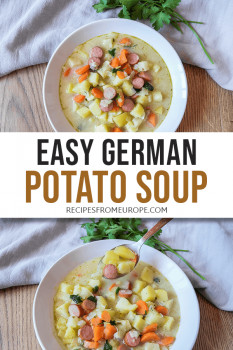 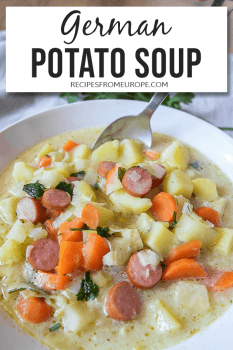 We Love A Big Bowl Of Hot German Potato Soup!

If you are searching for a thick and hearty soup that is sure to warm you up, look no further than our German potato soup recipe!

Inspired by Lisa’s love for potato soups – which she ate growing up – this recipe is loaded up with celery root, fresh parsley, carrots, leek, and potatoes, of course!

Soups are an important topic on this site given that we both grew up eating hearty soups.

Eric has a deep love for Hungarian goulash and creamy green bean soup while Lisa has lots of family-inspired soup recipes to share.

Of course, this is not the only way to make potato soup – although it is a more common way to cook up potato soup in Germany.

There are lots of different variations for German potato soup that include different versions/substitutions on the ingredients below.

Some recipes add different vegetables while in others you puree the potatoes and vegetables. When it comes to meat, there are also different options.

Traditional choices would be wiener or frankfurter sausages. However, these might not be that widely available depending on where you live. You can even skip the meat completely – the potato soup will taste amazing without it.

As for storage, this soup keeps well in the fridge.

If you made a lot, you can also freeze some of the soup. To be honest, we have never had this recipe last more than the very next day when we make it.

It is just such a good blend of hearty while somehow still feeling like a lighter meal that doesn’t make you feel bloated. We hope you enjoy this version of German potato soup!

For more great German potato recipes or soup recipes, try some of these out and let us know what you think: 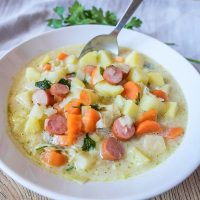 This delicious German potato soup recipe is loaded with goodness – from potatoes, carrots, and leeks to celery root, sausage, and lots of freshly chopped parsley. Served hot, this soup makes a tasty appetizer or can be served up as a main course itself!
4.62 from 18 votes
Print Pin Save Saved!
Prep Time: 30 minutes
Cook Time: 25 minutes
Total Time: 55 minutes
Servings: 6