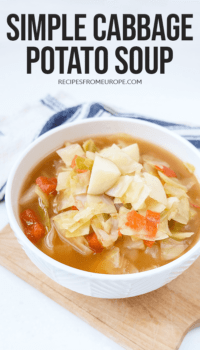 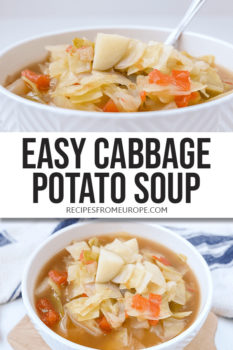 Here’s A Simple Cabbage Potato Soup That Fills You Up!

This simple cabbage potato soup is made from only a handful of ingredients. It’s amazing what you can do with cabbage, potato, onion, and tomato!

The thin broth is perfect for enjoying on a cold day or if you’re looking for a filling soup without the heaviness in your stomach.

Since it’s a family recipe, this is something Eric knows about firsthand!

Eric’s Hungarian grandma used to make cabbage soup all the time. The recipe has been passed down so that other family members could make it.

To be fair, it’s a common recipe for not just Hungary but for Eastern Europe, in general.

Cabbage and potatoes are classic ingredients from this area since they were/are easy to grow and can last a long time if needed.

Of course, with people in various different countries enjoying this soup, it’s no surprise that there are a number of cabbage potato soup variations. Many of them include meat.

Our soup recipe is made without meat but you can definitely add chunks of cooked ham, bacon, or even some smoked sausage (like a nice kielbasa) cut up into smaller pieces.

Eric also likes to add some Tabasco to his soup for a little more spice. Speaking of spice, you can make it “more Hungarian” by adding paprika, if you like.

This cabbage potato soup can also be made vegetarian easily. All you would have to do is omit the meat (like our recipe already does) and substitute the beef broth for vegetable broth.

The broth can even be made a little thicker with some roux but we enjoy the thinner broth on cold days.

As for things to serve cabbage potato soup with, you can always grab a nice fresh slice of bread with butter. The thin broth is perfect for dipping bread in!

How to Make Cabbage Potato Soup – Step by Step

If you are looking to whip up a pot of cabbage potato soup, you can check out the recipe card below.

In case you’d like to see what the various steps look like when you’re cooking, check out the following recipe process photos!

Remove the hard stem on both halfs of the cabbage.

Then cut the cabbage into strips and the strips into small pieces. This will make cooking the cabbage easier.

You can remove any overly hard pieces if you don’t like slightly more crunchy parts in your soup. Also wash and cut your tomatoes into small cubes.

Peel the onion and chop it into small pieces. Heat a teaspoon of oil in a very large pot and sauté the onion until it is translucent and starts to brown slightly. Stir regularly.

Add the cabbage and tomato pieces into the pot.

Then add enough beef or vegetable broth so that it just covers the vegetables in the pot.

In our case, it was 7 cups of broth. It might be slightly more or less in your case depending on the exact size of your cabbage.

Bring the broth to a simmer and let it simmer on low heat for about 50 minutes. Stir occassionally.

While the soup is simmering, wash the potatoes and cut them into small pieces.

After 50 minutes – when the cabbage is almost soft – add the potatoes and stir them into the soup so they are covered by the broth.

Let the soup simmer for another 20 minutes until the potatoes and the cabbage are fully cooked.

Add salt and pepper – as well as other spices such as paprika or tabasco – to taste. Serve and enjoy!

You can eat this soup over a period of around 3 days by storing the leftovers in the fridge and only reheating the amount that you’ll eat. You can either reheat it in a small pot on the stove or in a microwave safe bowl in the microwave.

Since this recipe makes quite a large pot of cabbage potato soup, you might be happy to hear that you can freeze this soup in a freezer container. Cabbage actually gets softer if frozen and reheated (which some people like).

This simple cabbage potato soup is easy to make and deceivingly filling. Made with green cabbage, potatoes, tomatoes, and a few spices, this is a thin broth soup that is great eaten fresh or reheated day after day.
5 from 3 votes
Print Pin Save Saved!
Prep Time: 15 minutes
Cook Time: 1 hour 10 minutes
Total Time: 1 hour 25 minutes
Servings: 6

There are many different additions and variations to this simple cabbage potato soup. The addition of meat is a popular one. Consider adding ham, bacon, or a smoked sausage (like kielbasa) in small pieces for flavor and heartiness.

Course Soups + Stews
Cuisine Hungarian
Thanks for signing up, we’re so happy that you’re interested in our recipes! Please check your emails (including your spam folder) to confirm your subscription!