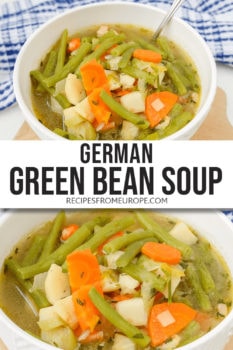 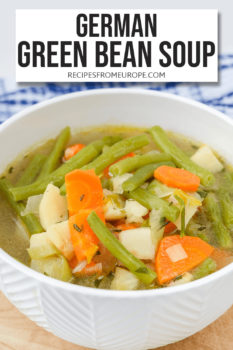 This German Green Bean Soup Is An Easy-to-Make Classic!

Want to make a simple yet filling soup that is loaded with good stuff? Our German green bean soup – or Grüne Bohnensuppe in German – is for you!

Made from a bunch of chopped vegetables and herbs, flavorful ham chunks, and – of course – lots of green beans, this German green bean soup recipe is really easy to make!

Green bean soup goes is great on a cold day or when you want a soup that is hearty but won’t leave you feeling bloated!

There are a number of German bean soup recipes out there. Lisa ate this green bean soup growing up.

In fact, green beans are a popular addition to soups across Europe.

We also have a creamy Hungarian green bean soup on the website (which is a family recipe and everyone seems to absolutely love it) and we’ll make many more in the future.

When making German green bean soup, there are a few variations to the recipe you might want to consider.

We flavored ours with both chopped parsley and savory. Savory, in this case, is an actual green herb and not just an adjective for food!

It looks kind of like rosemary but has a different flavor. We believe it really makes an impact on the flavor of the green bean soup.

How to Make Germen Green Bean Soup – Step by Step

To make this delicious German green bean soup recipe, you can have a look at the recipe card at the bottom of this post for exact measurements.

If you’d like to see each recipe step as you go, you can follow the green bean soup recipe process photos below.

This way, you can get an idea of how large to chop the vegetables, the herbs, and how it might look when it’s all together in the soup pot!

Start by gathering all of your ingredients.

Wash the green beans. Then cut off the ends and cut the beans into halves or thirds depending on their size and your personal preference.

Next, peel the potatoes. Then cut them into bite-size cubes.

Also, peel (or wash if you want to leave the peel on) and cut the carrots. Then cut them into slices or half-slices depending on their size.

Next, cut the ends off the celery root. Then peel and cut it into small cubes as well.

You can’t always find celery roots in North American grocery stores. If you can’t find any in your local grocery store, you can also just use two green celery sticks.

Wash the leek really well since it can be quite dirty in between the different layers.

Then cut the leek into rings.

Of course, you also have to peel and chop the onion into small pieces.

Lastly, also wash and chop the parsley and savory.

Savory might be an herb that you are not overly familiar with but it tastes great in green bean soup.

We were actually able to find it in our local grocery store without issues (which was honestly a bit surprising) so keep your eyes open when you’re shopping for ingredients.

After all this chopping, it’s time to sauté the onion and pancetta bacon. If your bacon pieces are quite large, you can cut them a bit smaller first.

Heat the oil in a large pot. Then add the pancetta bacon and fry it for a couple of minutes. No add the onions and sauté them until the onions are translucent and the bacon is slightly brown.

Then add the other vegetables (minus the parsley and savory) to the pot and sauté them for around 2 minutes as well.

Now add enough vegetable broth to just cover all the vegetables in the pot.

In our case, it was around 8 cups of broth, but depending on the size of your pot and the size of the vegetables you used, it might be slightly more or less for you.

Once you’ve added the broth, also add the parsley and the savory and give everything a good stir.

Place the lid on the pot. Bring the soup to a boil, then turn down the heat and let it simmer for 20-25 minutes until the vegetables are soft.

Add salt and pepper to taste.

And that’s it – making green bean soup is really quite easy and doesn’t take that long.

If you decide to add beef it obviously takes longer since the meat has to cook first, but it might be worth it if you really enjoy eating soup with meat in it.

Just make sure to cook the beef separately first and then add it in later when you make the soup – otherwise, the vegetables would be very mushy.

You can easily store the leftovers in an airtight container with a lid in the fridge for 2-3 days.

Alternatively, you can also make extras and then freeze them in freezer-safe containers.

If you want to freeze lots of soup, we’d recommend splitting it up into various portion sizes. This way you can easily take out the exact amount of soup you need and reheat it in a pot on the stove.