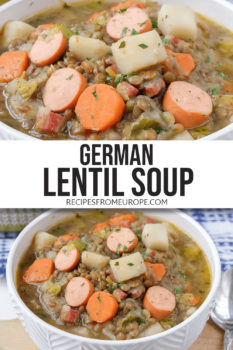 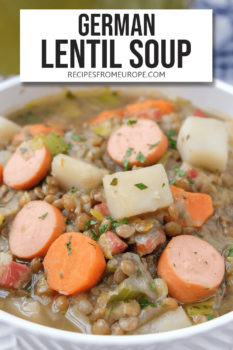 This German Lentil Soup Will Certainly Keep You Full!

Craving something warm, hearty, and all-around delicious? Our German lentil soup – called Linsensuppe in German- is the recipe for you!

This easy-to-make German lentil soup recipe is full of fresh ingredients that simmer down to become this wonderful creation that suits lots of different flavor palates.

With a thinner broth – but definitely hearty like a German lentil stew -, this soup features potatoes, carrots, celery, leek as well as pieces of pancetta bacon and European Weiner sausages. It’s a soup that serves well with a slice of fresh bread!

If you are making this soup recipe in North America, you might have to make a few substitutions compared to those who make it in Germany.

How to Make German Lentil Soup – Step by Step Instructions

If you want to make German lentil soup, you can find the recipe card with the exact measurement at the bottom of this post.

For those wanting to see the recipe process photos, you can follow along with the recipe photos below!

First, peel the potatoes and carrots. You could also leave the skin on if you prefer – but then wash them well so there is no dirt left.

Cut the potatoes into small cubes and the carrots into slices or cubes depending on their size.

Also, wash the celery, then cut it into slices.

Peel the onion and chop it into fine cubes. Also cut the pancetta bacon into small cubes if you didn’t buy pancetta that was pre-cut. Try buying pancetta that is not too fatty if you can.

Alternatively, you can cut some of the overly fatty pieces very small (or discard them completely) so that they’ll fry up in the pan.

At this time, also wash and cut the leek into rings. It’s really important to wash leek well since it can be quite dirty in between layers and you don’t want that to be in the soup.

Heat some oil in a large pot, then add the pancetta bacon and fry it for a few minutes until the fatty pieces appear translucent or lightly cooked. Stir regularly.

Then add the onions and sauté them until they are translucent and the pancetta bacon is lightly browned.

Now add the vegetables, give everything a stir, and then sauté them for a couple of minutes as well.

In the meantime, wash the lentils under running water…

… then add them to the vegetables in the pot.

Now pour in enough vegetable broth into the pot so that it just covers all of its contents.

We usually need about 6 cups of broth, but this might vary for you depending on your pot and the size of the vegetables you used.

At this stage, also add the chopped parsley and give everything a stir.

Now bring the soup to a boil. Once boiling, cover the pot with its lid and turn down the heat.

Let the soup simmer on low heat for around 30 minutes until the lentils are cooked and the vegetables are soft. Make sure to stir occasionally.

When the soup is almost done cut-up the wiener sausages. You could also leave them whole if you prefer – we just like cutting them up so that they are more evenly distributed throughout the soup.

After around 30 minutes, when the soup is basically done, add salt and pepper to taste.

Also, add the cut-up wiener sausages, stir everything, and then let them sit in the pot of soup for a few minutes until hot.

You can store any leftovers in a container with a lid in the fridge for 2-3 days. Make sure to only reheat the portions you want to consume and not all the leftovers at once.

You can reheat the soup either in a small pot on the stove or in the microwave.

Keep in mind that the soup might get mushier over time – but it will still taste delicious.

Want more German soups? How about soups in general? Then try out some of our other recipes: 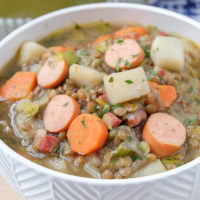