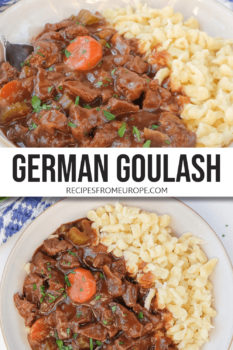 This German Goulash Recipe Will Have You Returning For More!

If you’re looking for a thick and hearty beef stew, you’ve got to make this German Goulash.

Made with thick-cut stewing beef and fresh vegetables like carrots and celery, this authentic German goulash recipe makes good use of a little red wine in the delicious broth!

This German beef goulash is a versatile dish. You can enjoy German goulash with spaetzle, semmelknödel (bread dumplings), potatoes, or other noodles (e.g. fusilli pasta).

We’re big fans of all kinds of goulash since it’s something we both grew up eating.

Although goulash originated in Hungary, nowadays there are lots of different goulash variations across Central and Eastern European countries.

Even within a countries, there are often lots of different versions of this popular beef dish.

In Lisa’s family, the German goulash is more like a stew with a thicker consistency. Her family usually enjoys it with Spaetzle and the goulash itself doesn’t have potatoes in it.

This is in contrast to Eric’s family’s Hungarian Goulash. This version is thinner in consistency (it’s a soup) and has potatoes in the soup.

Some people like to add bell pepper to their goulash, while others don’t use red wine or a thickening agent (like corn starch).

In general, though, goulash in Europe is made with beef that is cut into small cubes. This is in contrast to the American version of goulash where ground beef is cooked with elbow macaroni.

As you can see, there are lots of different versions of goulash out there and we’re sure you’ll find a recipe that suits your taste!

How to Make German Goulash – Step by Step Recipe Instructions

If you want to make authentic German goulash, then you can follow the Goulash recipe card at the bottom of this post for exact measurement.

Start by peeling your onions and cutting them into small cubes.

You might think that three onions is a bit much – but they will boil down when simmering. They help thickening the broth and give it extra flavor.

Also peel the carrot and wash the celery stick. Then cut both into slices. If you like having lots of vegetables in your goulash, feel free to add more.

On the other hand, if you don’t like that many vegetables in your goulash, you can reduce it by some. However, we would recommend adding at least a small carrot and a celery stick for the flavor.

Also cut the stewing beef into approx. 3/4 inch cubes. Our goulash contains relatively little meat compared to some other recipes since for us it is mainly a side eaten with filling noodles or dumplings.

So feel free to adjust the amount of meat you use – just remember to adjust spices and broth accordingly as well.

Melt some butter or oil in a large pot and fry the beef on high heat for a few minutes until the outsides appear to be cooked (there can still be some raw meat shining through).

If you want some extra flavor, you can also fully sear it until the outside has a browned crust.

We don’t usually do that since we want our beef to be extra tender later, but we know some people prefer it this way.

Either way, don’t forget to stir regularly. Once the meat has browned to your liking, remove it from the pot and place it into a bowl for now.

Now add the onions to the large pot and sauté them until translucent or lightly brown.

Then add the carrot and celery slices and sauté them for a few minutes as well. Remember to stir regularly.

Now add the paprika powder, tomato paste, and a pinch of sugar. Mix well and cook them on medium-heat for a minute as well.

Next, add the red wine in three increments (so 1/3 cup at a time). Add some wine, stir it in, then wait until the liquid has reduced noticeably.

We’d recommend using a red wine that you’d also drink – aka a decent quality once – since it will have a noticable impact on the flavor.

Then add some more wine. Repeat until you have used up the whole cup of wine. Stir regularly and wait until the liquid has reduced.

Now re-add the beef to the pot, give everything a stir, and add enough beef broth so that it just covers the contents in the pot.

For us that is usually between 1 1/2 – 2 cups of broth, but it might vary slightly for you.

Make sure to use a good-quality broth as this will significantly impact the flavor.

Bring the broth to a boil, then turn down the heat to low and add the lid. Let the goulash simmer on low for around 2 hours until the beef is very tender.

Stir regularly (but not too often since you don’t want the beef to fall apart) and add more broth as necessary. We don’t usually have to add more broth but depending on your pot and how much steam is evaporating, you might have to.

When you are happy with the tenderness of the meat, add salt and pepper to taste.

If you want the broth to be thicker, dissolve approx. 2 tablespoons of cornstarch in a little bit of cold water in a mug. This is completely optional though.

Add the mixture to the pot with the goulash and stir regularly while the broth is simmering until it has thickened.

You can serve your goulash with spaetzle (or other pasta like fusilli), potatoes, bred dumplings or fresh bread.

Store any leftovers in an airtight container with a lid in the fridge. Consume within 2-3 days.

While goulash tastes great fresh, it is actually one of the dishes that can taste even better a day later.

Simply reheat the goulash in a pot on the stove. Depending on how much cornstarch you added when making it (if any), you might want to add a little bit more water when reheating.

German Goulash is one of those classic, versatile dinner ideas. This beef stew is packed with carrots and celery and done up in a thick red wine broth. German goulash pairs perfectly with spaetzle dumplings or potatoes – and a bit of chopped parsley on top!
4.60 from 20 votes
Print Pin Save Saved!
Prep Time: 10 minutes
Cook Time: 2 hours 20 minutes
Total Time: 2 hours 30 minutes
Servings: 4