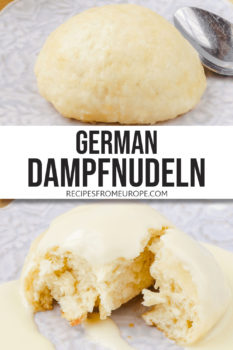 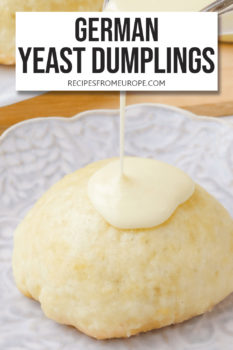 These Dampfnudeln Are Perfectly Plump And So Delicious!

Want to make German Dampfnudeln? We’ve got the Dampfnudel recipe for you!

These classic German dumplings are made with yeast dough, steamed to perfection, and can be enjoyed savory or sweet.

We like German steamed dumplings covered in a homemade vanilla sauce – but there are lots of other ways to enjoy them!

Dampfnudeln are mainly eaten in the south of Germany which is the part of the country that Lisa grew up in.

In case you are not familiar with the German language, you might be confused why we refer to the dumplings as “Dampfnudeln” and not as “Dampfnudel” as most people in North America seem to do.

The word without the “n” at the end is simply the singular form while “Dampfnudeln” is the plural form. Since we are making more than one dumpling, we are mainly using the plural form here!

There are actually a number of other names for Dampfnudeln. Aside from just yeast dumplings, in English, they are also sometimes referred to as German steamed bread or even sweet dumplings.

There are other types of yeast dumplings in German cuisine – called Hefeklöße – that differ from Dampfnudeln in the way that they are prepared.

Dampfnudeln are actually pretty easy to make – as long as you consider a few things.

How to Make Dampfnudeln – Step by Step Recipe Instructions

If you’d like to make these German yeast dumplings, you can find the recipe card at the bottom of this post with exact ingredients and measurements.

And in case you’d like to see some process photos, you can check them out below.

This way, you will have an idea of what the Dampfnudeln look like at each stage of the recipe!

Also either add the milk with the dissolved yeast or just add the instant yeast.

Use the spiral dough hooks of your electric mixer to knead the dough while slowly adding the milk.

Keep kneading the mixture until everything is well mixed and you can easily form the dough into a ball.

Cover the bowl with the dough with a dishtowel or lid and place it in a warm spot without draft. Allow the dough to rise for 60 minutes.

Once the dough has noticeably increased in size, sprinkle a little bit of flour on your countertop. Briefly knead the dough with your hands, then form it into a thick roll.

This will make it easier to cut the dough into equal pieces.

Cut the dough into 5 pieces of equal size.

Use the dough pieces to form small round dumplings. Try to keep the “seams” at the bottom so that the balls look relatively smooth at the top.

Press down on the top of the balls slightly with the open palm of your hand. Then let the dumplings rest for another 15 minutes.

In the meantime, add the butter, sugar, and milk to a large pot with a lid.

Melt the butter on low heat and mix regularly until the sugar has dissolved.

Once the butter has fully melted and the 15 minutes are up, place the dumplings in the pot.

Make sure to space them out as well as possible since they will increase their size noticeably.

Place the lid on the pot and don’t lift it again until the dumplings are done. Otherwise, they might deflate.

Steam the dumplings on medium heat for around 5-6 minutes. After that, turn down the heat slightly and steam them for 18-22 more minutes.

It’s great if you have a pot with a glass lid since you can see what happens inside the pot. That can be helpful if you’ve never made Dampfnudeln before.

Pay attention when all the milk has evaporated and less steam is produced in the pot. At this point, leave the dumplings in the pan for another minute or two so the bottoms can get nicely golden brown.

However, be careful here and use your judgement since you don’t want to burn the bottom of the dumplings either.

If you don’t have a glass lid, just make sure to listen really closely to the sounds from inside the pot. When the milk has evaporated, the sound will change to more of a sizzling.

When the dumplings are done, be careful when removing the lid and make sure that the water droplets on the lid don’t hit the dumplings.

The dumplings should have significantly increased in size.

Serve the dumplings right away. As mentioned, we like them with homemade vanilla sauce (which is super easy to make!).

In our opinion, Dampfnudeln taste best fresh so ideally you only make as many as you’ll need.

However, you can store leftover dumplings in a container in the fridge and reheat them the next day. We like doing this in the microwave with the dumpling already covered in vanilla sauce.

Alternatively, you can also cut the leftover dumplings into slices and fry these in some oil or butter. Enjoy!

A Dampfnudel is a steamed dumpling made from a yeast dough.

What does Dampfnudeln mean in English?

In English, Dampfnudeln literally means “steam noodles”. However, they are more commonly called German yeast dumplings and not actually considered a noodle.

What do you eat Dampfnudeln with?

Dampfnudeln can be enjoyed savory or sweet. Savory is best with gravy and mushrooms or meat. Sweet Dampfnudeln are delicious with homemade vanilla sauce, fruit compote, or a sauce similar to vanilla sauce made with white wine.

How do you make Dampfnudeln?

To make Dampfnudeln, create the yeast dough, let it rise, shape it into small dumplings and then steam them in a butter-milk-sugar mixture in a large covered pan on the stove. You can refer to the Dampfnudeln recipe for detailed step by step instructions.

For more German dumpling recipes (or things that are like dumplings), check out these other great dishes:

The Ingredients For The Steam Pot