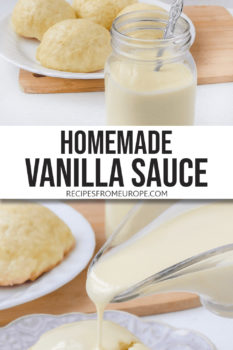 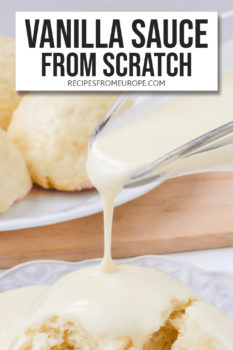 Here’s A Simple Vanilla Sauce Recipe That Goes With Everything!

If you need an old-fashioned vanilla sauce to top a dessert, you’re in the right place!

This is an easy recipe to follow. The result is a silky and creamy sauce that pours perfectly onto whatever dish you have lined up!

We really like this homemade vanilla sauce on Apfelstrudel and on German yeast Dumplings – known as Dampfnudeln.

If you know anything about sweet sauces, you’ll know that this easy vanilla sauce recipe is similar to how you’d make a vanilla custard sauce recipe.

However, this sauce is a bit thinner and runnier than a typical custard (which is usually more dense and velvety). It’s a recipe that is also similar to how we made homemade vanilla pudding.

Vanilla sauce is often eaten with apple strudel which is popular in the south of Germany and Austria.

So it’s no surprise that vanilla sauce is popular in these parts of Europe, too. Of course, this sweet sauce is also made and eaten in other parts of the continent (and the world)!

How to Make Homemade Vanilla Sauce – Step by Step

This sauce has a rich vanilla aroma, a nice, sweet taste, and a smooth finish. And it’s actually really easy to make at home!

Just follow the recipe card at the bottom of this post for exact measurements. To see some process photos for how we make this sauce, just keep on scrolling down.

First, add the milk, cream, and the vanilla extract to a medium-sized pot.

Give everything a stir but then set it aside for now.

Separate the eggs and add the egg yolks to a medium-sized mixing bowl. You can save the egg whites and use them for another recipe (e.g. coconut macaroons or cinnamon stars).

Now add powdered sugar to the egg yolks and mix everything using the normal beaters of your electric mixer.

Keep mixing until you have a creamy consistency and the color gets slightly less yellow and more white.

Now it’s time to add the cornstarch and the same amount of milk from the pot you set aside earlier to the bowl. The milk is added so that the consistency doesn’t get too sticky.

Mix again using your electric mixer until there are no cornstarch lumps and everything is well combined.

Now bring the pot with the milk, cream, and vanilla extract to a boil while whisking regularly.

Once boiling, remove it from the hot burner and pour the egg-sugar-cornstarch mixture into it while whisking consistently.

Place the pot back on the hot burner and let the sauce simmer for 1-2 minutes until it has thickened noticeably.

Whisk constantly and remember, it is a sauce – not a pudding – so it won’t get overly thick.

Remove the sauce from the burner and pour or ladle it into a bowl to chill, a serving boat, or directly onto your dessert if you like your vanilla sauce warm.

If you want it to cool and avoid the formation of skin at the top, cover the top of the warm sauce with cling wrap (it should touch the sauce directly, not just the bowl itself).

Ideally you serve the vanilla sauce the same day that you made it after it has cooled slightly.

If you have some sauce left over, you can store it in an airtight container in the fridge for around two days.

You can also freeze the sauce – see the FAQ for detailed re-warming instructions.

What is vanilla sauce?

Vanilla sauce is a smooth, creamy, and slightly thickened dessert sauce made from eggs, vanilla extract, and powdered sugar, among other ingredients.

What’s the difference between custard and vanilla sauce?

They are similar in taste and preparation. Vanilla sauce can be thought of as a sub-category of custard that is thin and pours well (as opposed to a thickened-style custard). Because this sauce pours (more like a sauce), the name “vanilla sauce” is popular in German-speaking countries.

How to use vanilla sauce?

Vanilla-flavored sauce is commonly used as a sweet accessory to many dessert dishes like Apple Strudel, Bread Pudding, and German Dampfnudeln. It can also be enjoyed with cut up fruit like strawberries.

Can you freeze vanilla sauce?

Yes, just be sure to store it in a sealed container. To reheat it for use, let it thaw out some and then transfer the sauce to a pot on the stove. Slowly reheat the sauce on low heat, whisking constantly to avoid burning. You may need to add a little bit of water to help re-achieve a smooth and fluid consistency.

For more sweet recipes (with or without vanilla sauce), try out these other creations:

This homemade vanilla sauce is the perfect sweet addition to many classic European desserts like Apfelstrudel or German Yeast Dumplings! Easy to make and rich with vanilla aroma, this sauce takes desserts to the next level!
No ratings yet
Print Pin Save Saved!
Prep Time: 5 minutes
Cook Time: 5 minutes
Total Time: 10 minutes
Servings: 4