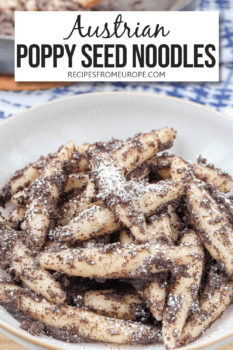 Mohnnudeln Might Surprise You As The Perfect Sweet Dinner Option!

Looking for a sweet dinner or unique dessert? Mohnnudeln – literally called Poppy Seed Noodles – might be the thing for you.

Made from a hearty potato-based dough, these Austrian potato noodles – similar to Schupfnudeln – are rolled and boiled then finished in a coating of powdered sugar and ground poppy seeds!

Unsurprisingly, this is a region known for the production of poppy seeds – and there are many other great poppy seed recipes that come from this area of Europe. One example is poppy seed strudel.

When making Mohnnudeln, it’s really, really important to mash the potatoes well. There should be no potato lumps in the dough.

This will make it easier to roll the dough, form the noodles, and cook them. A good way to check for potato lumps is to run your hands through the bowl of dough and squish any remaining lumps.

Related to this, it is important to use starchy potatoes such as russet potatoes. This recipe will not work as well with waxy potatoes.

Also, make sure to use ground poppy seeds and not whole poppy seeds since there’s a huge difference in taste.

You can also adjust the amount of poppy seeds and powdered sugar used for the topping to your liking – in case you want to use more or less.

How to Make Mohnnudeln – Step by Step Instructions

If you want to make some sweet and delicious Mohnnudeln, you can check out the recipe card at the bottom of this post.

For those wanting to follow along with the step by step process, you can see (almost all) the process photos below.

First, boil the potatoes in a pot with water on the stove for around 20-25 minutes (depending on their size) until you can easily pierce them with a fork.

Once fully boiled, remove the potatoes from the pot. Let them cool for a few minutes, then peel them.

Place the peeled potatoes into a medium-sized mixing bowl.

Now mash the potatoes using a potato masher or press them through a potato press if you own one.

Make sure that there are no potato lumps left.

Now add the flour, egg, and salt to the mashed potatoes in the bowl.

Mix everything together using your hands until everything is well mixed and you can easily form the dough into a ball.

Sprinkle flour onto your countertop and roll out on half of the dough into a long sausage.

Keep rolling until the dough has an approximate diameter of 1.5 inches.

Now cut the dough at approximately every 3/4 inch so you have lots of small pieces.

Take a little piece of dough and roll it on the counter top or in your hands. You can use more flour if it appears sticky.

Shape the dough into a noodles that has the approximate thickness of your finger and taper the ends slightly.

Repeat these steps with every little piece of dough.

Once you have used up all the little dough pieces, roll the second half of dough into a sausage, cut it into small pieces, and shape more potato noodles.

Fill a large pot with water, bring it to a boil and add a little bit of salt. Once boiling, turn down the heat to medium-low so that the water is just very lightly boiling.

You don’t want to boil all the noodles at once since they need enough space to float to the top.

While the noodles are boiling, get a large frying pan and melt the butter in it. Then add the powdered sugar and ground poppy seeds. Gently stir everything together until it is well mixed.

Add the noodles that are done boiling to the pan with the sugar-poppy seed-mixture (turn down the temperature to low!) and gently stir them around until they are coated well.

Plate the Mohnnudeln and sprinkle some more powdered sugar on top. Enjoy!

Mohnnudeln taste best fresh out of the pan in our opinion but you can store leftovers in a container with a lid in the fridge for 2-3 days.

To reheat them, you can microwave a few in a bowl, or – if you are reheating a larger batch – you can toss them back in a frying pan with a bit of butter.

What is the difference between Spaetzle versus Mohnnudeln?

Can Mohnnudeln be made with whole poppy seeds?

If you’re looking for other European dinner dishes that can be served sweet, we’ve got a few more recipe ideas for you!

For The Frying Pan

Course Dinner
Cuisine Austrian
Thanks for signing up, we’re so happy that you’re interested in our recipes! Please check your emails (including your spam folder) to confirm your subscription!