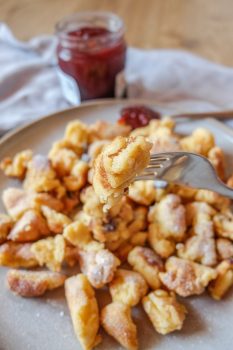 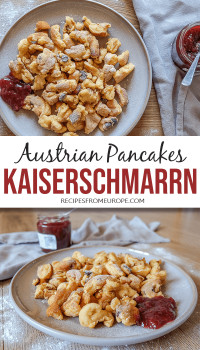 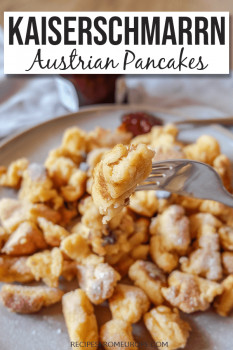 We Love Kaiserschmarrn And This Pancake “Mess” Is Very Easy To Make!

Looking for a dessert that is easy to make and where it definitely doesn’t matter if you mess it up? Try Kaiserschmarrn (sometimes also written as Kaiserschmarren)!

This “messy pancake” is a delicious dessert – made from a sweet batter – that has been popular for almost two centuries!

Served with powdered sugar and various fruit jams (compotes), it’s a classic Austrian dish you can find if you travel around Europe near the Alps. Given that it’s such a regional dish, it can be hard to find a Kaiserschmarrn recipe in English. Well, that’s where we come in!

That said, Kaiserschmarrn has a great back story – in fact, it has many versions. What is agreed upon is the fact that it got its name from being a favorite dish of Austrian Emperor Francis Joseph I.

The name Kaiserschmarrn is made up of two words. “Kaiser” means Emperor and “Schmarren” is a loose, colloquial term to mean “mess” in the south of Germany and Austria.

How the Emperor got to tasting Kaiserschmarrn for the first time is up for debate: from having a wife looking to lose weight to having a nervous farmer cook it up for lunch when the Emperor stopped by. Whatever the story, the broken apart pancake is delicious!

Kaiserschmarrn is a dessert that is close to our hearts, too. Lisa grew up eating Kaiserschmarrn because even though it is Austrian, it is also popular in Bavaria in the south of Germany (where she grew up).

She often made it when she was a kid old enough to use a stove – but she left out the rum raisins!

Eric’s first interaction with Kaiserschmarrn was in Vienna at an authentic Viennese restaurant a few years back. Let’s just say that eating Kaiserschmarrn in the Austrian capital (complete with plum compote) was an unforgettable experience.

Honestly, Eric still raves about how that dessert was one of the best he has ever tasted. Yeah, it was that good.

To whip together your own broken pancake, just follow the recipe below. It is very easy to do and is perfect for those cooks just starting out who maybe haven’t honed their skills yet!

The original recipe includes rum-soaked raisins but they can be left out or substituted for other kinds of dried fruit.

As for the toppings, a hearty dusting of powdered sugar is a must when it comes to Kaiserschmarrn. It is also often served with a fruit compote (which is slightly different from jam – but jam also tastes great if you don’t have any compote).

It was originally done with plum compote but apple sauce also works very well with the eggy, doughy, sweet pancake! We hope you enjoy this recipe – have fun making a mess of things!

If you liked Kaiserschmarrn, there are other great Austrian desserts or (or just desserts that are pancakes) that you may like! 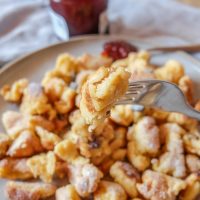 Course Desserts
Cuisine Austrian
Thanks for signing up, we’re so happy that you’re interested in our recipes! Please check your emails (including your spam folder) to confirm your subscription!