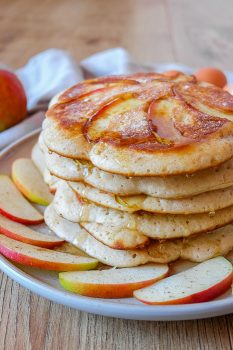 Searching for a sweet and delicious treat that can be breakfast, brunch, dinner, or an after-dinner dessert? German apple pancakes are what you’re looking for!

Super fluffy and perfectly sweet, these apple pancakes are loaded with fresh apple and served hot right from the pan!

We love these apple pancakes. We aren’t usually huge into sweets but something about these pancakes makes them both hearty and filling like a brunch item and sweet at the same time.

It’s just the right combination to not feel completely like you are eating an overly sweet dessert while still making sure you know you are eating delicious apple pancakes!

Lisa actually grew up eating apple pancakes – but like actual German apple pancakes (this recipe) not what is sometimes known as German pancakes in the United States.

Those pancakes – also sometimes called Dutch babies – were supposedly brought to the US by German immigrants centuries ago and are prepared slightly different than the Apfelpfannkuchen (apple pancakes) that we usually know and make in Germany.

So don’t be surprised if this recipe is slightly different than what you would expect!

We’ve actually seen a bakery have a window for exclusively selling apple pancakes in the German city that we used to live in!

Next to other delicious apple treat like Apfelberliner (similar an deep-fried apple donut), we’ve had our fair share of this delicious dessert item. After a while, it was time to create our own recipe for it!

The key to this version is to fill the batter with apple bits but also add/insert apples and place them on top of each pancake after you spoon the batter into the pan.

You can totally get creative with these – Lisa likes making five-point stars but you could also make letters for the names of the eaters!

Another great part of these apple pancakes is that they are naturally sweet – due to the apples and the sugar in the recipe. So, in our opinion, you don’t even have to add any kind of syrup to enjoy them (but you can if you like!).

This is coming from Eric who – as a Canadian – will add maple syrup to basically anything! We really enjoy these pancakes with a sprinkle of powdered sugar and a hint of agave syrup.

If you loved these German apple pancakes, here are a bunch of similar recipes that you’re sure to enjoy! 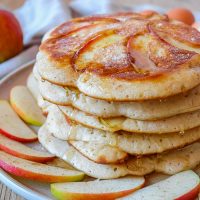 Perfectly fluffy and wonderfully sweet, these German apple pancakes are a great addition to any brunch and can even be enjoyed as a dessert. Loaded with apple inside and sliced apples on top, the cinnamon and sugar make them enjoyable on their own – or with a drizzle of syrup and powdered sugar!
4.75 from 4 votes
Print Pin Save Saved!
Prep Time: 15 minutes
Cook Time: 20 minutes
Total Time: 35 minutes
Servings: 5 pancakes

Course Breakfast + Brunch
Cuisine German
Thanks for signing up, we’re so happy that you’re interested in our recipes! Please check your emails (including your spam folder) to confirm your subscription!