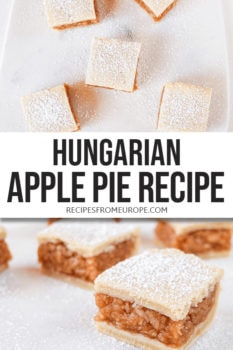 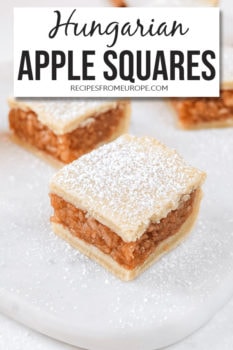 Looking to make one of the best Hungarian desserts around? Hungarian apple pie – or almás pite in Hungarian – is for you!

Made from a simple pie-like dough, the inside is an easy-to-make combination of apples, cinnamon, and sugar.

It’s a dessert that goes well with any meal and is easy to devour as a hand-held treat!

This is a Hungarian recipe that is near and dear to Eric’s heart since it was passed down from his Hungarian Mama (grandma).

Eric remembers them as Mama’s apple squares and eating them as a kid. She would almost always have a pan of her famous squares made when they would visit – and they were amazing every single time.

Hungarian apple pie is an authentic dessert made from simple ingredients. It’s kind of a nod to the ingredients our grandparents used to use back in the day.

When it comes to making Hungarian apple squares, there are a few different ways to do the crust.

Some people fold the bottom layer up over the top (more like a traditional North American Pie). We only made a small crust up the sides of the baking pan to catch the apple juice when it bakes.

It’s really up to personal preference and pan size – Mama didn’t have much of a crust so the inner juice would flow out in the oven and caramelize a bit in the pan (which was an added treat!).

How to Make Hungarian Apple Pie – Step by Step

If you’re going to make Hungarian apple pie, you can check out our recipe card below.

In case you are more of a visual learner, you can follow along with the process photos below. This way, you can see if you’re on the right track!

Start by mixing flour and shortening with your hands in a large bowl. You’ll get a crumbly mixture.

Add the water, salt, and egg and knead the dough using your hands until it forms a ball.

Once all the ingredients are well combined and your ball of dough isn’t overly sticky, separate it into two smaller balls of dough.

One ball should be just slightly larger than the other one.

Place flour onto a smooth surface and roll out the slightly bigger ball of dough with a rolling pin until it is just larger than your baking pan.

Now gently place the dough into your baking pan and form a small crust up the side of the pan.

Peel the apples, cut them in halves or quarters and remove the core.

Then grate the apples using the side of a box grater you would use for grating cheese. You can grate them straight into a strainer or onto a plate and transfer them to a strainer later.

Once you are done grating the apples, it’s time to squeeze out the juice. You can place a bowl underneath the strainer to capture the juice – it’s delicious!

You can either squeeze small amounts of apple in your hands or use your hands to press down onto the apples in the strainer.

Just make sure to squeeze out a lot of juice, otherwise your pie might get soggy.

Transfer the squeezed apples to a medium bowl and sprinkle cinnamon and sugar on top. Use a spatula or your hands to evenly coat the apples.

Once the apples are evenly coated in sugar and cinnamon, add them on top of the dough in your baking pan.

You can use your hands or a spatula to make sure that the mixture is spread out evenly.

Then roll out the other ball of dough and place it on top of the apple filling. You can connect the top and bottom dough along the edges.

Poke holes into the top of the dough so the steam can escape when the pie is in the oven.

Optional: You can also brush the top with some egg wash if you want the pie to have more of a golden brown color.

Bake the pie at 350 degrees Fahrenheit for around 40 minutes.

When the pie is done baking, remove it from the oven and let it cool in its pan.

Once cooled, cut the apple pie into small pieces. You can sprinkle some powdered sugar on top before serving.

When it comes to storage, cut the uneaten squares and put them in a container with a lid on the counter.

They might get a little softer over time as they cool and sit. We don’t usually have the squares lasting more than a day or two anyways.

Looking for more Hungarian recipes? Try out these tasty classics:

Course Desserts
Cuisine Hungarian
Thanks for signing up, we’re so happy that you’re interested in our recipes! Please check your emails (including your spam folder) to confirm your subscription!