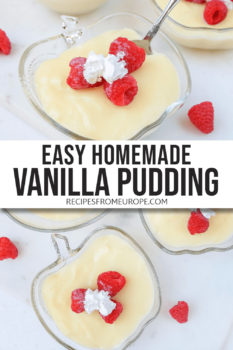 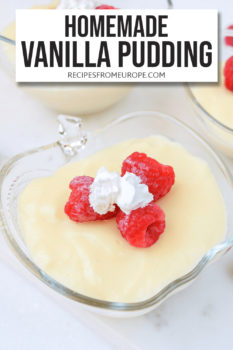 Here’s a Classic Vanilla Pudding Recipe That Everyone Loves!

Our vanilla pudding recipe is actually not that difficult to whip together – pun intended – at all.

With just a few ingredients like vanilla extract, milk, eggs, and corn starch, you too can make vanilla pudding from scratch.

This easy vanilla pudding is perfect to serve to guests as a simple dessert, great for the family to enjoy together, or just to enjoy all to yourself!

It’s no secret that pudding is something that isn’t usually made from scratch. There are some popular pudding brands out there that make enjoying it easy.

That said, homemade pudding has something that much more satisfying about it… maybe it’s the fact that it was created from scratch?

We both grew up eating vanilla pudding so this is a recipe that sits close to the heart. Pudding might not be outright “German” but it’s definitely enjoyed all over the country.

Pudding is also an ingredient used in German baking. You can find it in vanilla pudding cakes and even German bee sting cake (another recipe we love)! Instant pudding powder is also added to German cheesecake.

How to Make Homemade Vanilla Pudding – Step by Step

For those of you who like to follow along with recipes visually, you can check out the process photos below.

It’s an easy recipe, but there are a couple of different steps involved in making pudding. So it might be helpful to see the steps as you create!

First, pour the milk into a medium-sized pot but don’t turn it on yet.

We don’t want your milk to boil over while you’re busy mixing something else (speaking from personal experience here).

Separate the eggs and add the egg yolks to a medium-sized mixing bowl. You can use the egg whites for a different recipe.

We have two easy cookie recipes on our website that only use egg whites – coconut macaroons and cinnamon stars.

Once you have separated all three eggs, add the powdered sugar (also called icing sugar) to the bowl with the egg yolks.

Use the normal beaters of your electric mixer to mix the egg yolks and sugar together until the mixture has a creamy consistency and gets lighter in color (more white than yellow).

Then add the cornstarch and the same amount of milk of milk from the pot on the stove. This will help avoid the mixture from becoming too thick.

Fun Side Note: This pudding recipe is quite similar to a classic vanilla sauce recipe which goes with Dampfnudeln. The difference is the overall thickness of the final products – vanilla pudding is thick while the vanilla sauce is thinner and runny!

Mix again using your electric mixer until all the cornstarch is well mixed in and no lumps are visible. Then set the bowl aside.

Back to the pot of milk on the stove – add the vanilla extract and bring the milk to a boil while whisking regularly.

If you want a more intense flavor, you can also use a vanilla bean instead of vanilla extract. Read the notes of the recipe card for more infos.

Since we know that vanilla beans are not always widely available and can be quite expensive, we decided to use vanilla extract.

When the milk starts boiling, remove it from the heat.

Pour the egg-sugar-cornstarch mixture into the milk while whisking constantly.

Return the pot back to the hot burner and let the mixture simmer for 1-2 minutes until it has thickened. During this time, whisk constantly.

Once the mixture has thickened noticeably, pour or ladle the pudding into small bowls and let it cool.

If you don’t like the “pudding skin” that sometimes forms on top of the pudding, you can cover the bowls with cling film.

When making this vanilla pudding recipe, you can top it however you like.

Vanilla is a pretty universal flavor and so adding some berries – like raspberries – or whipping cream on top is always a welcomed addition!

If you liked this homemade vanilla pudding recipe, check out these other recipes for sweet treats!