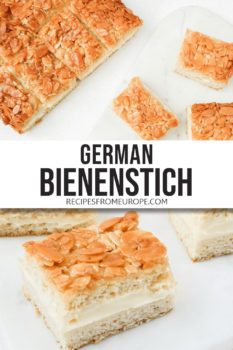 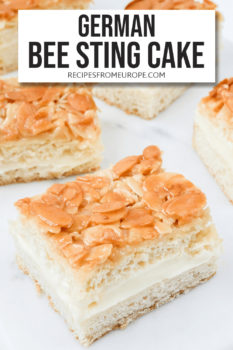 Looking for a delicious German cake with a nice level of sweetness? You’ve got to make this Bienenstich recipe.

The dough is the same as for a classic German butter cake. The cake is then cut and filled with a silky layer of vanilla pudding cream.

The top is finished off with honey and butter glazed almonds that create a wonderful crunch when you break through!

Bienenstich – pronounced something like “Bee-nin-steeH” (there is no exact English equivalent for the German “ch” sound) – is a classic German cake recipe.

In fact, the history of Bienenstich – and how it got its unique name – is a fun story.

Legend has it that the German baker who first made the cake had to endure a few bee stings… because they were attracted to the honey in the almonds!

Luckily, the baker was committed enough to the cake recipe to share it. For us, the pain involved in putting together this bee sting cake recipe was minimal!

Bienenstich was always a popular cake in Lisa’s family – especially when she went to visit her grandparents for coffee and cake on the weekends.

How to Make Bienenstich – Step by Step Recipe Instructions

If you want to make this recipe for Bienenstich, you can find the whole recipe card at the bottom of this post.

For those who want to follow along with the process photos, you can see them below.

Sometimes it is just easier to see visuals of what you are supposed to do – especially when a cake involves multiple steps like this one.

We’ll start by making the dough for the cake. First, heat up the milk in the microwave or in a small pot on the stove until it is warm.

It should be warm but not too hot or boiling since that could harm the yeast bacteria.

Add the flour to a large mixing bowl, then also add the dry yeast. Sprinkle the sugar on top and pour the warm milk in as well.

Knead everything with the spiral dough hooks of your electric mixer for a couple of minutes.

Now add the butter and the egg. They should both be at room temperature since that’s better for the yeast.

Keep kneading the dough with your electric mixer – or your hands – for around 5 minutes until it forms a ball and the dough doesn’t stick to the sides of the bowl anymore.

Cover the bowl with the ball of dough with a lid or dishtowel and place it in a warm spot in your home without a draft for around one hour.

In the meantime prepare the vanilla instant pudding according to package directions. There are different brands out there.

Some puddings have to be boiled, others don’t so just follow the instructions on the package and make sure to add a little bit more vanilla extract.

If you don’t want to use instant pudding, you can also easily make your own vanilla pudding at home. We have an easy recipe for homemade vanilla pudding that you can follow.

Once you have made the pudding, pour it into a bowl (if you made it on the stovetop) and cover it with cling film.

This will stop the “pudding skin” that some people hate so much from forming. Then set the bowl with the pudding aside for now.

Now it is time to prepare the almond topping. For this, add butter, sugar, honey and whipping cream to a small pot.

Heat everything on the stove on low heat until the butter has melted and the sugar has dissolved. Stir regularly.

Once the mixture is heated, remove the pot from hot burner and stir in the sliced almonds. After everything is well mixed, set the pot aside to allow the mixture to cool.

Back to the dough for the cake! After the dough is done rising, sprinkle some flour onto the countertop.

Knead the dough briefly with your hands, then roll it out with a rolling pin until it is the same size as your baking pan. We used a baking pan with the size of approx. 13.5 x 9.5 inches.

Lightly grease and flour your baking pan. Then place the dough into the pan and let it rest for another 15 minutes.

In the meantime you can preheat your oven to 350 degrees Fahrenheit.

When the 15 minutes are up, spread the cooled almond topping onto the dough.

Then bake the cake on the middle rack of your oven for approximately 20-25 minutes until the top is golden brown.

Start watch the cake towards the end since every oven is slightly different and you don’t want the top to get too brown.

When the top is nicely golden brown, remove the cake from the oven and let it cool in the pan.

In theory you could eat the cake like this but we want to make an actual bee sting cake so there are a few more steps involved.

Once the cake is pretty much cool, finish the pudding cream filling.

Here you have two choices:

Once the cake has fully cooled, first cut along the edges between the cake and the pan to make sure the cake is not sticking to the pan.

Then cut the cake into quarters and remove them from the pan.

Now cut the quartered slices horizontally in the middle to separate the almond-covered top from the cake bottom. In our experience, this works best with a serrated knife.

Spread the bottoms of the cake with the pudding-cream filling. We would also recommend that you cut the tops into slices of your desired size now.

It is so much easier to pre-cut the tops now than cutting the whole assembled cake later since the crunchy almond top can make it quite difficult to cut through.

Then place the cut almond tops back on top of the pudding-cream filling in their correct place.

Repeat the steps with the other quarters until you have spread filling onto all bottom parts and cut the tops for the whole cake.

In our case, we cut each quarter into four slices. However, depending on the size and form of your baking pan you might want to cut them differently.

Cover the assembled cake with aluminum foil and place it in the fridge for at least one hour to allow the pudding filling to get firmer.

When serving the cake, just cut it using the pre-cut top slices as guides.

In our opinion, Bienenstich tastes best fresh so you should make it either the day you plan to serve it (if you have enough time) or maximum the night before.

You can store leftover slices covered with foil or in a container in the fridge for an extra day or so. But since this cake has a cream/butter-pudding filling it doesn’t last as long as dry cakes without filling do. 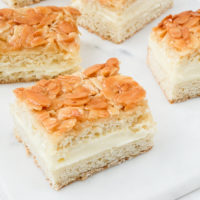