These Appelflappen Are So Easy To Make!

If you’re looking for a sweet Dutch treat that is really easy to make, Appelflappen are a go-to.

Also known as Appelflap (the singular form of Appelflappen) or even Apple Hand Pies, these apple delights are made with puff pastry and fresh apples.

Generally eaten around New Year’s – much like Oliebollen – you can bake them yourself or find them sold at the same types of kiosks that also sell Oliebollen!

Most North Americans would likely call these sweet treats “apple turnovers”. However, depending on where you are in the Netherlands, some people would call the dessert in this recipe an Apple Beignet.

In fact, in some places in the Netherlands, you might ask for an Appelflappen and be handed a turnover (made from puff pastry like this recipe) or a beignet (battered and fried apple ring). The name is often used synonymously in everyday life!

We actually have a recipe for the other apple creation known as Apple Beignets – we call them Apfelküchle (German Fried Apple Rings). Because there aren’t enough terms already, some people call these fried beignets an apple fritter!

No matter what you call them, the Appelflappen in this recipe are delicious!

To make this easy Appelflappen recipe, here are the ingredients that you will need –

Before you make these Dutch Appelflap, have a read through these recipe tips so that you achieve best results aka the best turnovers!

How to Make Appelflappen – Step by Step Instructions

You can find the complete instructions and process photos for this appelflappen recipe in this section.

The photo will help you follow along in case you want to see how we made ours and compare your progress!

First, start by preheating the oven to 350 degrees Fahrenheit.

Then peel and core the apples and cut them in small cubes. Then place them into a small bowl.

Add 2 tablespoons of sugar (keep 1 tablespoon aside) and the cinnamon to the apples.

Mix until the apples are evenly coated in sugar and cinnamon.

Unfold the puff pastry sheets, sprinkle a little bit of flour onto them and flatten them with a rolling pin to remove the precut lines.

Try to keep a square shape when flattening. Repeat with the second sheet.

Cut the pastry sheets in four squares on each sheet. This works well with a pastry wheel or pizza cutter.

Divide the apple mixture over the eight squares and spread it out on half of each sheet (in a triangle).

Then fold the sheet diagonally. Now cut the edges evenly if necessary and close them by pushing down with a fork.

Whisk the egg until smooth and brush over each appelflap.

Then sprinkle the remaining sugar over them.

Bake the appelflappen in the oven for about 25 minutes, or until golden brown. Then place them on a baking rack to cool off for at least 15 minutes.

Once these appelflappen are baked, they are best enjoyed hot and fresh (after cooling for just a bit).

Leftover turnovers can be stored at room temperature in a sealed container to avoid getting stale.

However, excess moisture from the filling might make the pastry soft and not as crispy over time so consume them within 2 days.

If desired, you can reheat these appelflappen in the oven for a few minutes until warm again or even in the air fryer if you own one. They might not be as crispy and flaky as freshly made but are still good.

Here are some commonly asked questions and answers about Appelflappen!

Appelflappen is the Dutch term for an apple filled treat eaten around New Year’s. While many people equate an appelflappen to be an apple turnover, some use appelflappen to describe a battered and deep fried apple ring (beignet).

To make appelflappen, prepare the apple filling by mixing chopped apples with sugar and cinnamon. Roll out the puff pastry and trim it into squares. Fill the squares then fold the dough and pinch shut with a fork. Apply egg wash to the pastry and bake until golden brown and flaky.

If you liked this recipe for Appelflappen, here are some more Dutch recipes that you might enjoy: 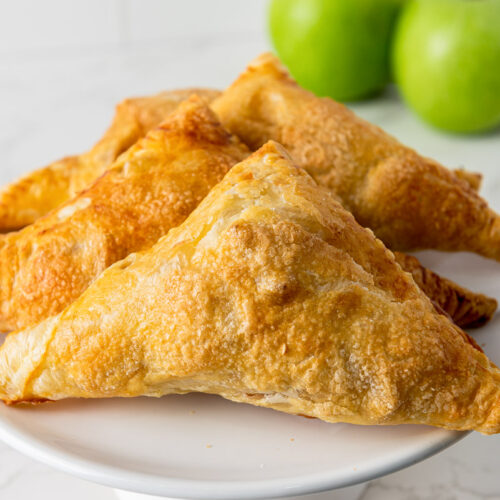 Course Dessert
Cuisine Dutch
Thanks for signing up, we’re so happy that you’re interested in our recipes! Please check your emails (including your spam folder) to confirm your subscription!