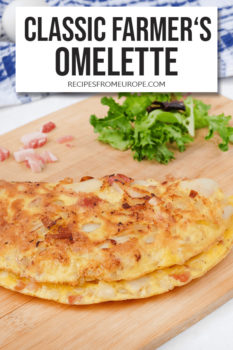 This Farmer’s Omelette Is A Whole Meal In One!

If you’re looking for a hearty breakfast or brunch item, you’ve got to make a classic German/Austrian Farmer’s Omelette!

Called Bauernomlett in German, this omelette recipe is popular in the southern German state called Bavaria and also in Austria.

The hearty omelette recipe packs pancetta bacon, onion, cheese, and even potatoes into am eggy exterior. It really doesn’t get much more tasty or convenient.

Our farmer’s omelette is actually quite similar to our Spanish omelette recipe (Tortilla de Patatas).

The only real differences are that the Bauernomlett has ham or bacon in it and a Spanish omelette is much larger since it’s usually prepared for more than one person.

Lisa has experience eating both. Growing up in Bavaria, this omelette recipe is something she would make with her dad on the weekends.

When she lived in Spain, she made Spanish omelette pretty often, too! In any case, both recipes are delicious in their own right.

There are a few things to consider when you make a farmer’s omelette.

Traditionally, this farmer’s omelette is made with German “Schinkenspeck” (a type of bacon). Unfortunately, it can be quite difficult to find in North America.

The closest to it that we have come across is Italian pancetta bacon. So that’s what we used for this recipe. Alternatively, you could also use normal North American bacon.

If you have large chunks of pancetta or bacon, cut them smaller and even consider removing some of the fatty pieces.

Cut the potatoes (if you include them) small so you have an easier time cooking the egg and folding the omelette.

Pre-boiling the potatoes is also advised since the time to cook the eggs is too little to cook raw potatoes.

Definitely cook the omelette on a lower heat. This might take longer but you want to avoid burning the onions and browning the bottom of the egg to a crisp while the top is still raw and flowy.

How to Make a Farmer’s Omelette – Step by Step

If you’re keen to make this farmer’s omelette recipe, you can find the recipe card at the bottom of this post.

For those of you who want to follow along visually, you can check out the process photos right below. This way, you can see if you’re on the right track with how we prepared our Bauernomlett!

In our opinion, this recipe is less stressful to make when we prepare all the ingredients – except for the eggs – at the beginning.

Chop up your onions into small pieces, peel and finely cut your potato (optional), grate your cheese and also cut the pancetta bacon into smaller pieces if they are quite big.

Take a medium-sized frying pan and add the bacon. Fry it on medium heat until the fatty parts start getting translucent. Stir frequently.

Then add the onions and mix them around so they get covered in the bacon grease.

Fry them on medium heat until the onions are translucent and the bacon is slightly crispy.

Then add the potato slices and fry them for a couple of minutes as well (optional). Stir regularly.

Crack the eggs into a small bowl and add salt an pepper to taste. Keep in mind that the pancetta bacon can already be quite salty.

Use a fork to whisk the eggs until they are uniform in color.

Once the bacon and the onions are sufficiently fried, pour the whisked eggs over the other ingredients in the pan.

Turn down the heat slightly and fry the egg for approximately 4 minutes on low-medium heat. Don’t move the contents of the pan around and don’t scramble the eggs!

Then sprinke the cheese on top of the omelette.

Add a lid to allow the cheese to melt and let the omelette fry on low-medium heat for approx. 3 more minutes until the cheese has melted and the eggs are fully cookied.

Once the omelette is fully cooked, slide it out of the pan onto a plate and flip half of the omelette over onto its other half. Cut it in half and serve hot. Enjoy!

If you liked this classic Farmer’s Omelette, try out these other German recipes:

A Farmer's Omelette – called Bauernomlett in German – is the perfect hearty breakfast. Packed with thick bacon, potatoes, onions, and melted cheese, this eggy creation is like a whole breakfast dish in one! It makes a great brunch item, too.
No ratings yet
Print Pin Save Saved!
Prep Time: 5 minutes
Cook Time: 15 minutes
Total Time: 20 minutes
Servings: 1

Course Breakfast + Brunch
Cuisine European
Thanks for signing up, we’re so happy that you’re interested in our recipes! Please check your emails (including your spam folder) to confirm your subscription!