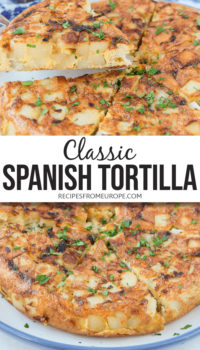 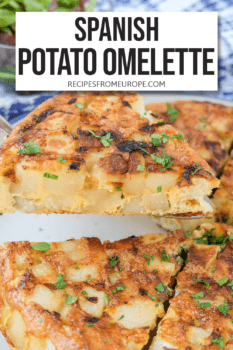 Ever Had A Spanish Omelette? A Classic Tortilla de Patatas Is So Good!

If you are a fan of omelettes, we have got a recipe for you! Not be confused with a tortilla – the thin flatbread – a Spanish tortilla is made completely differently.

Loaded with delicious potatoes and eggs, this Spanish omelette recipe makes a great dish to eat for breakfast, lunch, and even dinner.

When Lisa lived in Spain she ate Spanish potato omelette – or tortilla de patatas as it is often called in Spain – very often.

It’s just such a great lunch or afternoon snack. So of course, she eventually learned how to make it herself.

Often times, you can find small tortillas or slices from a bigger tortilla served on a baguette type bread in Spanish tapas bars.

A baguette with Spanish tortilla makes for a really great lunch idea. The classic version with potatoes is called “bocadillo con tortilla de patatas” – and is so good!

What’s In A Spanish Omelette?

The beauty about a Spanish omelette is that it can be prepared very simple or it can be as complex as your taste buds desire.

Spanish omelette can be prepared with lots of little add-ins like ham, cheese, ham and cheese (jamón y queso) or chorizo.

To be honest, the addition of ham and cheese would bring the omelette recipe closer to our other favorite – the Farmer’s omelette, also known as Bauernomlett.

That said, our tortilla version below is more of a classic version with eggs and potatoes – and sometimes simple is just the best!

One of the things that Lisa learned when making tortillas in Spain is that instead of cutting the potatoes into thin slices, it is actually easier if you cut them into cubes (at least in our opinion). And that’s what we’ll be doing in this recipe as well!

Also, the tortilla de patatas tastes so much better when you use high-quality olive oil instead of other vegetable oils.

We usually don’t cook too much with olive oil (we use it for cold dishes instead), but we make an exception when it comes to Spanish potato omelettes.

Furthermore, the type of potatoes you use can really make a difference. We recommend using an all-purpose kind of potato – such as white potatoes – instead of a starchy potato so that the potato cubes won’t get too mushy.

How to Make a Spanish Omelette – Step by Step Instructions

If you are keen to make this tasty dish, you can find our Spanish tortilla recipe card with the exact measurements at the bottom of this post.

In case you’re new to Spanish tortillas and want to follow the recipe step by step, you can check out our recipe process photos below.

This way, you can compare your Spanish omelette to ours to see how it’s coming along!

First, peel your onion and potatoes. Chop the onion quite fine and cut the potatoes into approx. 1/4 inch sized cubes.

We would recommend that as the maximum size – you can cut them even smaller if you have the patience for that. The smaller the pieces, the faster they will cook, and the better the tortilla will “stick together”.

Next, heat olive oil in a frying pan. We have found that the oil can make quite a difference in the taste of the tortilla.

So we’d really recommend using high-quality olive oil since this is a simple dish without lots of spices or other ingredients.

As for pans, we usually use a “normal” medium-large frying pan for making Spanish tortillas. This works well for the amounts indicated in the recipe card below.

However, we obviously don’t know your pans, so use your judgement when deciding whether the tortilla will fit or not.

Add the onions and sauté them on medium heat until translucent. Make sure that the oil is not too hot because you don’t want the onion pieces to burn. Stir regularly.

Put a lid on the pan and fry the potatoes on medium heat until tender. When the potato is cut into very small cubes (1/4 inch or smaller), this takes approx. 10-12 minutes. However, this might vary depending on your oven and pan.

Make sure to stir ocassionally.

When you want to check if the potatoes are done, squish a couple of potato cubes with a spatula or wooden spoon.

If they crumble easily then the potatoes are cooked enough.

Remove the pan from heat and drain most of the oil using a colander. Then return the potatoes and 1-2 tablespoons of oil to the pan.

Spread out the potatoes so that they are evenly distributed.

Crack the eggs into a bowl and add salt and pepper to taste. Remember that you already added some salt to the potatoes earlier!

Whisk the eggs with a fork until they are uniform in color.

The move the pan with the potatoes back to the hot burner and evenly pour the egg mixture over the potatoes.

Cook the tortilla on medium-low heat for approx. 10-15 minutes (again, this can vary depending on your stove and pan) until the bottom of the egg has cooked.

The top of the omelette might still be a little bit runny – that’s okay. Howver, if the top is still very runny, you should wait for a few more minutes before flipping them omelette.

Now carefully slice a spatula along the edges of the pan to make sure that the potato omelette is not sticking the the edges.

Then place a plate (or a round pizza pan for example) that is larger than the frying pan on top of the pan.

Now flip the pan and the plate so that the omelette is now on the plate with the frying pan on top of it. Then lift the pan and let the tortilla rest on the plate. Make sure to wear oven mitts since it is possible to burn yourself.

Carefully slide the tortilla back into the pan with the uncooked side now facing down. Allow that side to cook for a few minutes as well until the omelette is fully cooked through.

Once fully cooked, remove the pan from the heat and let the omlette settle for a couple of minutes. Then slide it onto a plate and serve.

You can cut the omelette into slices and sprinkle it with some chopped parsley for a pop of color before serving – but that’s completely optional.

Spanish tortilla can be enjoyed warm or cold. It is actually quite common to eat it at room temperature.

If you have leftovers, store them in a container with a lid in the fridge. Just make sure that the tortilla has fully cooled first. Assuming the tortilla was fully cooked through, leftovers should keep for up to 3 days.

You can enjoy the leftovers cold (which is what we often do), or reheat them in the microwave.

For more yummy Spanish recipe, try out these classic dishes:

Perfectly browned and simple to prepare, this Spanish omelette – called Tortilla de Patatas – is filled with hearty goodness. Fried potatoes and egg form the base of this delicious dish that can be enjoyed for different meals throughout the day!
5 from 1 vote
Print Pin Save Saved!
Prep Time: 10 minutes
Cook Time: 20 minutes
Total Time: 30 minutes
Servings: 6 slices

Course Dinner
Cuisine Spanish
Thanks for signing up, we’re so happy that you’re interested in our recipes! Please check your emails (including your spam folder) to confirm your subscription!