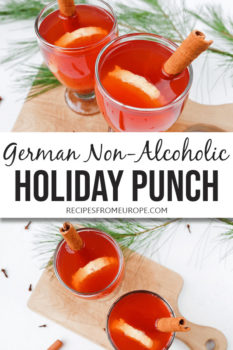 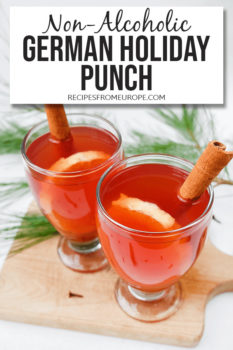 Searching for a great recipe for non-alcoholic punch? You should maker Kinderpunsch!

This classic holiday drink – literally known as “kid’s punch” in English – is a German non-alcoholic punch.

With a signature red color and a bit of sweetness, Kinderpunsch always lets off the holiday spices that it boils in.

You can smell the cinnamon, cloves, and added citrus from a mile away!

Despite the name, Kinderpunsch isn’t just for kids. It’s often found at quintessential German Christmas markets and usually sold at the same stand where you buy a glass/mug of Glühwein (German mulled wine).

It’s kind of like non-alcoholic Glühwein in that regard… which can also be thought of as more like a kinder Glühwein!

Kinderpunsch is one of those German Christmas market treats that lets the kids get in on the action when the adults are sipping back their hot beverages.

It’s also a great addition to the holiday gathering for those who don’t want an alcoholic drink.

Sometimes, you might just want a warm drink without booze – and non-alcoholic German punch is the answer!

We really like Kinderpunsch because it’s a warm drink that is objectively tasty.

The spices used are one thing but the citrus – both the lemon and orange – are what really make Kinderpunsch stand out.

A thing to consider when making this recipe is the tea you use. We like a deep red color but any fruity tea will technically work.

We enjoy our Kinderpunsch with little added sugar but you can always add more sugar if you want it slightly sweeter.

The type of apple juice you use will also dictate the sweetness of the punch so keep that in mind, too.

When you’re heating the punch, be sure that the mixture doesn’t start boiling.

The mixture should only stay hot and allow for the spices and citrus flavors to mingle with the juice and tea.

When serving the Kinderpunsch you can include an orange slice and a cinnamon stick in the glass if you want the drink to look slightly fancier.

This classic non-alcoholic punch – or Kinderpunsch, in German – is the perfect holiday drink without alcohol. Made from fruity tea, apple juice, and fragrant spices like cinnamon and cloves, this "kid's punch" smells of citrus, isn't too sweet, and is always a hit during the holidays!
5 from 1 vote
Print Pin Save Saved!
Prep Time: 5 minutes
Cook Time: 15 minutes
Total Time: 20 minutes
Servings: 4

You can use any type of red fruit tea that you like…. it just should be red to give the Kinderpunsch its classic color.