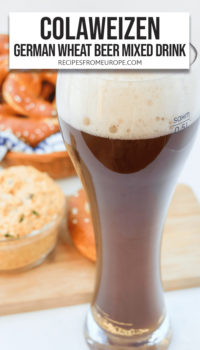 Ever Had A Colaweizen? Here’s The Recipe For This German Mixed Drink!

Let’s cut right to the chase – if you’re here, there’s a good chance you know about the drink known as Colaweizen.

Made from half wheat beer and half Cola, this very German mixed drink is the perfect summertime sipper.

Colaweizen is served in a wheat beer glass and is a nice, sweeter alternative for those who don’t have the palate for wheat beer!

Having grown up in Bavaria, Lisa is no stranger to the concept of Colaweizen. Eric, on the other hand, thought that this mix of Cola and cloudy wheat beer was kind of strange.

However, upon first sip, you’ll be convinced otherwise!

As we said, it’s a nice alternative every once in a while – and this is especially good if you’re not a huge fan of German wheat beers.

Bring the German beer garden to you with authentic pretzels, Obatzda cheese, German meatballs, and a Radler beer!

If you’re wondering how to make a Colaweizen, you’re in luck – it’s really easy. Simply add your Cola or Pepsi to your tall beer glass and then fill the rest with wheat beer (like Erdinger, for example).

When you pour in the beer, remember to tilt the glass in the beginning so you don’t create too much foam. Towards the end of the pour, place your glass upright to create a little bit of foam. You want just enough foam – see the photo above for reference.

As for the mixture ratio, usually, you mix it at 50:50 – so half Cola, half Weizenbier. However, you can always do 2/3 wheat beer and 1/3 Cola for a stronger drink! 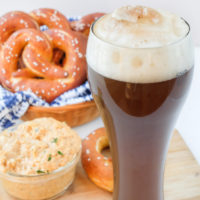 There is nothing quite like a Colaweizen! This classic German drink – made from half Cola and half wheat beer – is a refreshing and sweet creation that'll make you feel like you're at a German beer garden!
5 from 3 votes
Print Pin Save Saved!
Prep Time: 1 minute
Total Time: 1 minute
Servings: 1