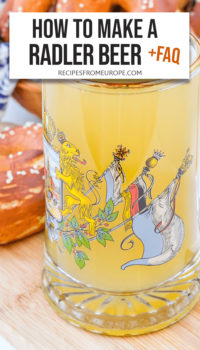 Searching for the perfect refreshing drink that includes the best of two worlds? Then a radler is for you!

Made from one half beer and one half citrusy soda, this classic German drink (also known as a German Radler or German beer with lemonade) is a hit at beer gardens but sipped on all year round.

It’s easy to whip together so you can enjoy one for yourself in no time!

It’s no secret that Radler beer is popular across Germany. In fact, this drink even has different names depending on the region.

In Bavaria (where Lisa grew up), a Radler is called a “Radler” but in the north of Germany you’ll often find it called “Alsterwasser”.

Whatever the local name, German beer lemonade can usually be found on the menu. It’s the kind of thing you’d sip on while enjoying German pretzels and Obatzda (in Bavaria at least)!

When talking about Radler names and ingredients, though, you have to be careful. German lemonade is not the same as North American lemonade.

When Germans speak of “Limonade” they are talking about something similar to Sprite or 7-Up (carbonated citrus sodas) not the sweet, non-carbonated lemon beverage.

Since Lisa enjoys this drink, we’re pretty on-top of the topic in North America. Some beer companies do make radlers. That said, many here in Canada make their Radler with grapefruit juice.

While it’s tasty, that’s not how Radler is typically consumed in Germany. In fact, Lisa has never seen a Radler with grapefruit juice before moving to North America.

That’s why we often just make our own Radler at home. This way, we can make it exactly how we like it.

What is a Radler beer?

A Radler Beer is a German alcoholic drink made from one half beer (usually a pale lager such as pilsner) and one half lemon-lime citrusy soda.

What type of beer goes in a Radler?

Usually, the beer portion of a Radler is a pale lager, e.g. a pilsner. However, any lighter colored beer will usually do. Just don’t use a stout, amber, or any really dark and/or hoppy beers.

What is the soda mix in Radler beer?

The soda mix in a Radler beer is “German limonade” which is more like a citrusy soda (like Sprite or 7 Up, for example).

What is the difference between a Shandy and a Radler?

From a drink perspective, a Shandy and a Radler are the exact same drink – beer mixed with a lemon-lime soda. The difference is that a Shandy is British since it was invented in Britain whereas a Radler is German. In fact, the Shandy pre-dates the German Radler.

Does Radler have alcohol?

Typically yes, a Radler contains alcohol. However, you can make a Radler with alcohol-free beer if you don’t want it to contain alcohol.

Can you get drunk off Radler?

Since a Radler is half beer, yes, you can get drunk off drinking Radlers. That said, they are pretty sugary so you have to be careful with how many you drink!

How to make a Radler beer?

Making a Radler is really simple. Pour one half of the citrus soda into a glass first. Then, pour in the pale lager beer with the glass at an angle – this will help to prevent the formation of excess foam at the top. 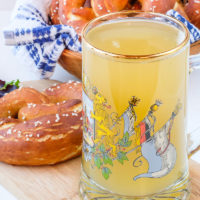 With this Radler recipe, you can easily make your own at home. Using a little beer and a citrusy soda, you can enjoy a nicely sweetened, carbonated drink in no time!
No ratings yet
Print Pin Save Saved!
Prep Time: 1 minute
Total Time: 1 minute
Servings: 1