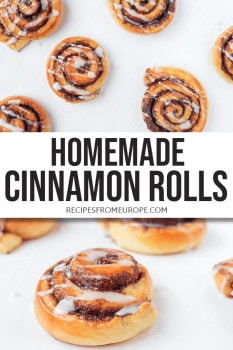 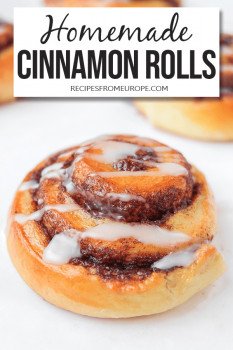 These Homemade Cinnamon Rolls Are Sweet And Delicious!

Looking to make some tasty homemade cinnamon rolls? These soft cinnamon rolls are doughy yet dense, perfectly sweet, loaded with cinnamon, and finished off with a delicious simple icing drizzled on top.

These rolls make a great breakfast, the perfect day snack, or a small and simple dessert after dinner. Basically, you can eat these cinnamon rolls any time!

We’re big fans of a classic cinnamon rolls. These sweet treats are Scandinavian by origin – and we know a thing or two about all things Scandinavia.

Lisa actually lived in Denmark for a number of years and Eric travelled through the region multiple times over the same time frame.

This homemade cinnamon roll recipe always reminds us of sitting in a cozy cafe in Copenhagen with a coffee in hand and not a care in the world.

If you want to make these cinnamon rolls, they seem like quite a bit of work but they are actually not that difficult.

The most important thing to remember is to use yeast that is still good and hasn’t expired. And to bring some patience since the cinnamon rolls just taste so much better when they get sufficient time to rise!

If this homemade cinnamon roll recipe feels a little much to take on, here are some step-by-step photos to show you what things should look like as you go!

Start-off by heating the milk in the microwave or on a pot on the stove. It should be slightly warmer than lukewarm, but not hot nor boiling!

Add the yeast and sugar and use a whisk to mix everything together until the yeast has dissolved.

Now add the egg, butter, cardamom (if you have any), and salt into the mixture. Use the spiral dough hooks of your hand mixer to mix everything.

Then you add in the flour in small increments and keep mixing for a few minutes until your dough forms a ball and doesn’t stick to the sides of the bowl anymore.

Cover the bowl with the dough and place it in a warm spot without a draft so the dough can rise. Let the dough rise for around 30-45 minutes until its size has significantly increased.

Towards the end of the waiting period, you can prepare the cinnamon roll filling. For this, mix soft butter, cinnamon and brown sugar with the normal hooks of your hand mixer until it looks like in the photo above.

These are just estimates but having a tape measure nearby honestly helps to make the cinnamon rolls all roughly the same size.

Now it’s time to evenly spread the filling on top of the dough using a spatula or a spoon. It’s important to gentle and patient when doing this step so that the dough doesn’t rip. With soft butter this step is significantly easier.

Once you’ve spread out all the filling, start rolling one of the long sides of the dough into a sausage. Cut off the uneven ends.

Then measure and cut the dough into even pieces that are approx. 1 1/4 inches wide.

Now press down slighty on the rolls with one hand to flatten the dough a bit. Once you’ve done this, let the rolls rest for another 20 minutes.

In the meantime, preheat your oven to 350 degrees Fahrenheit. Also prepare the egg wash by cracking an egg into a small bowl and whisking it with a fork until it is uniform in color.

After the 20 minutes are up, brush the rested cinnamon buns with the egg wash and bake them in the oven for approximately 15 minutes.

In the photo above you can see what the cinnamon rolls should look like when you take them out of the oven. Remove them from the baking sheet and place them on a cooling rack.

While the rolls are cooling, prepare the glaze by whisking powedered sugar and water together. Drizzle the icing over the cinnamon rolls once they have cooled – and you’re done!

As for storing these rolls, we’ve honestly never had a fresh batch last more than 2 or 3 days.

On day three, you can pop them in a microwave for about 10 seconds and they’ll taste like they came out of the oven again.

For similar sweet and/or Scandinavian recipes, you can try out these other great creations: 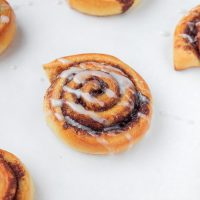 Inspired by Scandinavian baking, this version of homemade cinnamon rolls are similar to what you'd find in a bakery in Denmark! These sweet and delicious rolls are glazed with a simple icing making them perfect for a small breakfast, after-dinner dessert, or snack to go with tea or coffee.
5 from 1 vote
Print Pin Save Saved!
Prep Time: 20 minutes
Cook Time: 15 minutes
Additional Time: 50 minutes
Total Time: 1 hour 25 minutes
Servings: 15 cinnamon rolls

Course Desserts
Cuisine European
Thanks for signing up, we’re so happy that you’re interested in our recipes! Please check your emails (including your spam folder) to confirm your subscription!